The other day, while sorting through the mail, I saw a letter from the DMV. It was my renewed Driver’s License. Now, I know for most, this is pretty insignificant, but this time, it was special. I slowly took it out of the envelope, and stared at it.

This was a big deal for me – it had my address on it! You see, since I first got my driver’s license at 16, I alway put down my parent’s address. Even as an adult, I moved around a lot and it’s such a hassle to change it, so I didn’t.

Two years ago, shortly after my grandmother died, I moved into her house.

One of the few pictures I have of my Oma and Cooper, two months before she died.

A year later, I had the opportunity to purchase her home, and I did. The driver’s license I held in my hand, had the address of my home, my permenant home, for the first time.

Purchasing my own home has really changed me, built me, you could say. Listing this as my permenant residence made me feel like I’m finally an adult; at 33 years of age I’ve become a grown-up.

I have so many memories of this house. As a child, I swam in the pool (that is now covered with grass), I made mudpies in the backyard, I ran through the sprinklers every summer, played cards with my grandparents on the patio, helped my grandmother bake cookies, and make her German Spatzle. When I was 19, my Oma let me move in with her, and the room I occupied for two years, is now my son’s room. My mom also grew up in this house, and slept in the same bedroom.

It’s neat to know the stories of this house, how it has evolved, like why and how the brick was added to the front, when the cement that widened the driveway was poured, and what was there before those bushes in front of the garage.

I have preserved some memories, but have also tried to make it my own. For example, here’s a look at my grandma’s kitchen: 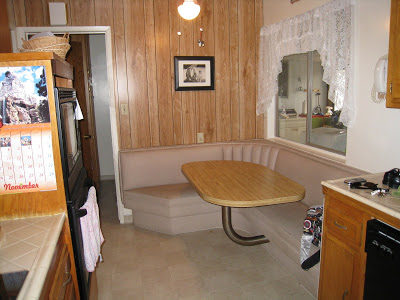 I can recall many nights sitting at this table, eating meals, playing cards, and watching the tiny little TV that used to sit in the corner. I spend a lot of time in the kitchen, so I decided to make some changes and hired a friend to do the work. Emotionally, it was a difficult thing to do, but I knew that I needed to make this home “mine.”
Here’s the “new” space: 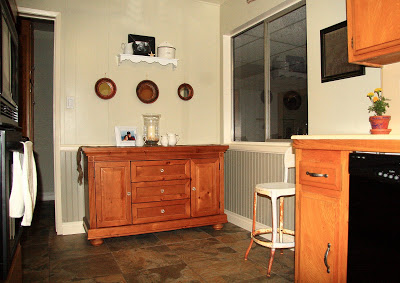 The first thing to be removed was the table and bench seat, and when I came home that day and saw them sitting in the driveway, I cried. But I must admit, I love the new look.

Of course, some things will never change. 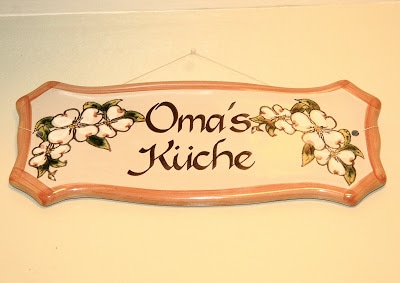 You can’t see it in the picture, but this sign, brought home from one of her many visits to her native Germany, hangs above the window, and as long as I’m living here, it always will.

This house that helped to shape me, is going to be the house that shapes my son as well. Some of his favorite things? Playing in the water in the backyard, digging in the dirt where I used to make mudpies, building Lego towers on the patio, and helping me bake cookies in Oma’s kitchen.

It is a joy and a privilege to own this home and to have the opportunity to watch my children grow up here, just like I did. I’m looking forward to making new memories with them.