Learn how to make delicious, tender and flavorful Sour Cream Chicken Enchiladas! Flour tortillas are stuffed with flavorful chicken and smothered with a creamy green chile and sour cream sauce then topped with melted cheese.

Here’s a new recipe to add to your monthly meal rotation – Green Chile and Sour Cream Chicken Enchiladas! These creamy enchiladas are stuffed with tender, flavorful chicken that cooks in your crock pot for hours to infuse the flavors.

I use flour tortillas for this recipe because they are softer and easier to eat. For the sauce, I thickened chicken broth using a roux, then stirred in green chile enchilada sauce and sour cream. My slow cooker did the work of cooking the chicken in a blend of chicken broth, lime juice and seasonings. Then I shredded the meat and mixed it with cream cheese and a shredded cheddar jack blend. If you have a stand mixer it can do the mixing for you.

A corn tortilla stuffed with meat, then rolled up and covered in a red chile and tomato sauce is a traditional, authentic enchilada. Today, the term “enchilada” is used for any blend of meats and cheese rolled into a tortilla and covered with a chile sauce.

Enchiladas are one of my favorite foods. They are so comforting and can be prepared so many different ways from classic Enchiladas to a layered Casserole to Soup. I’ve even made a breakfast enchilada casserole! The flavors are so inviting and you can spice it or keep the heat level mellow.

How to Make Green Chile and Sour Cream Chicken Enchiladas

There are a few extra steps to this recipe so it does take a little extra planning. But the steps and ingredients are simple and go quickly.

If you are short on time or just want to make this recipe a little faster, here are a few tips:

Sour Cream Enchiladas go great with Mexican Rice and Mexican Beans or just a simple copycat Olive Garden Salad or even some frozen corn. Keeping it light is key, since this is a heavier dish. Or, simply serve with salsa and sour cream for topping.

If you have leftovers, store in an airtight container and reheat in the oven or microwave. I don’t recommend freezing as it can cause the tortillas to get quite soggy. 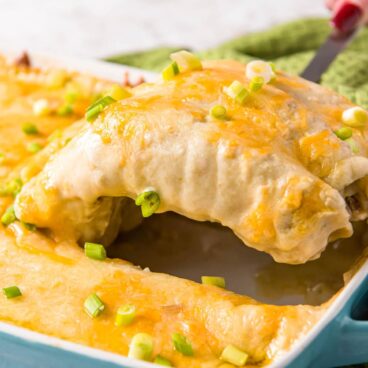 NOTES: To simplify this recipe:

Calories: 738kcalCarbohydrates: 41gProtein: 43gFat: 44gSaturated Fat: 23gCholesterol: 170mgSodium: 1738mgPotassium: 516mgFiber: 3gSugar: 8gVitamin A: 1536IUVitamin C: 15mgCalcium: 486mgIron: 5mg
Have you tried this recipe?
Let us know how it was by leaving a review or sharing on Instagram with the tag #yellowblissroad 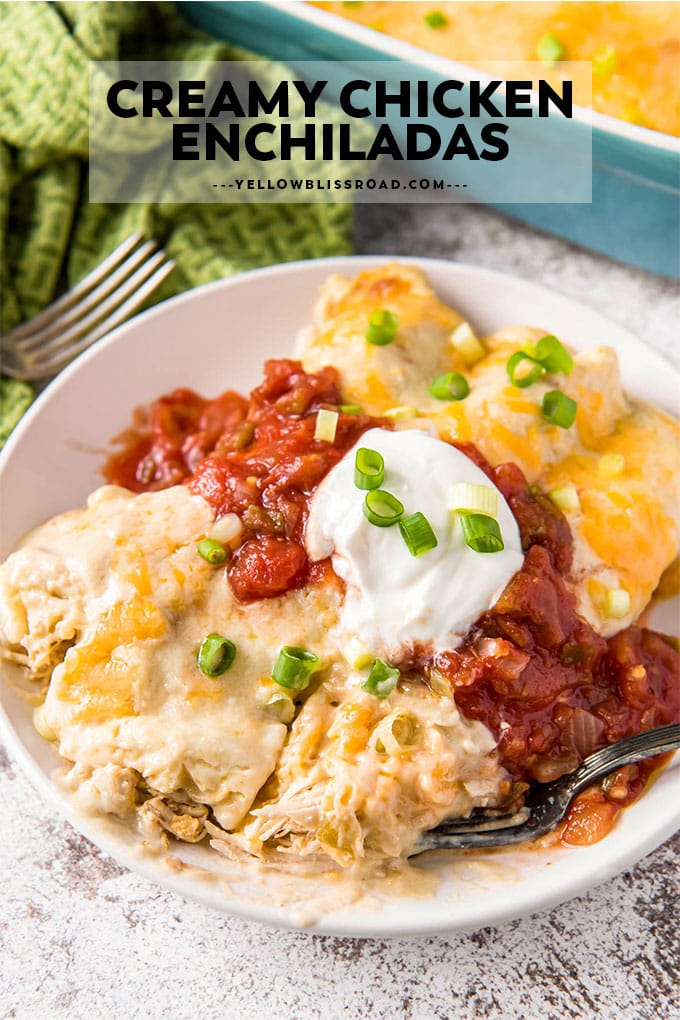