Sour Cream Salad is a family favorite and a version of Ambrosia Salad. It has oranges, pineapple, cherries, marshmallows, walnuts and a sour cream and whipped cream dressing.

At each and every family gathering we had when I was a kid, this Sour Cream Salad was expected! It’s a version of the popular Ambrosia Salad, and it’s creamy texture and sweet fruits combined with crunchy walnuts are a match made in heaven!

Canned pineapple, mandarin oranges, maraschino cherries and marshmallows in a creamy dressing of sour cream and cool whip. This salad is very similar to a traditional Ambrosia salad, except we don’t use coconut and add walnuts for crunch.

Doesn’t it look yummy? It’s the perfect dessert or side dish for your next summer picnic or BBQ gathering!

How to Make Sour Cream Salad 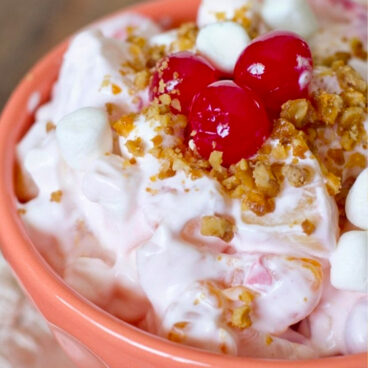 Calories: 236kcalCarbohydrates: 40gProtein: 2gFat: 9gSaturated Fat: 4gCholesterol: 16mgSodium: 40mgPotassium: 214mgFiber: 3gSugar: 34gVitamin A: 939IUVitamin C: 23mgCalcium: 83mgIron: 1mg
Have you tried this recipe?
Let us know how it was by leaving a review or sharing on Instagram with the tag #yellowblissroad