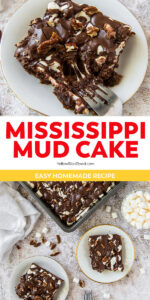 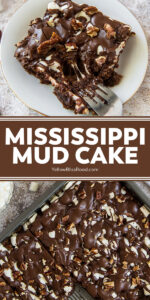 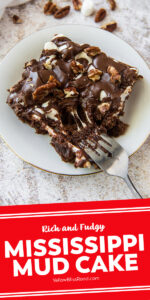 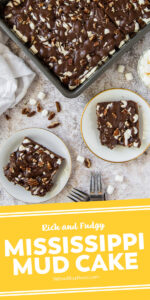 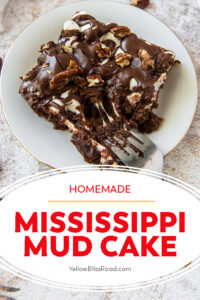 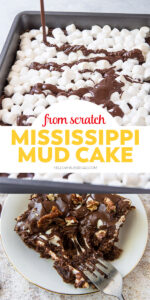 Mississippi Mud Cake is an ooey gooey chocolate cake with marshmallows, pecans and a fudgy chocolate glaze. It’s a classic Southern Sheet Cake recipe that is just as delicious as it sounds! 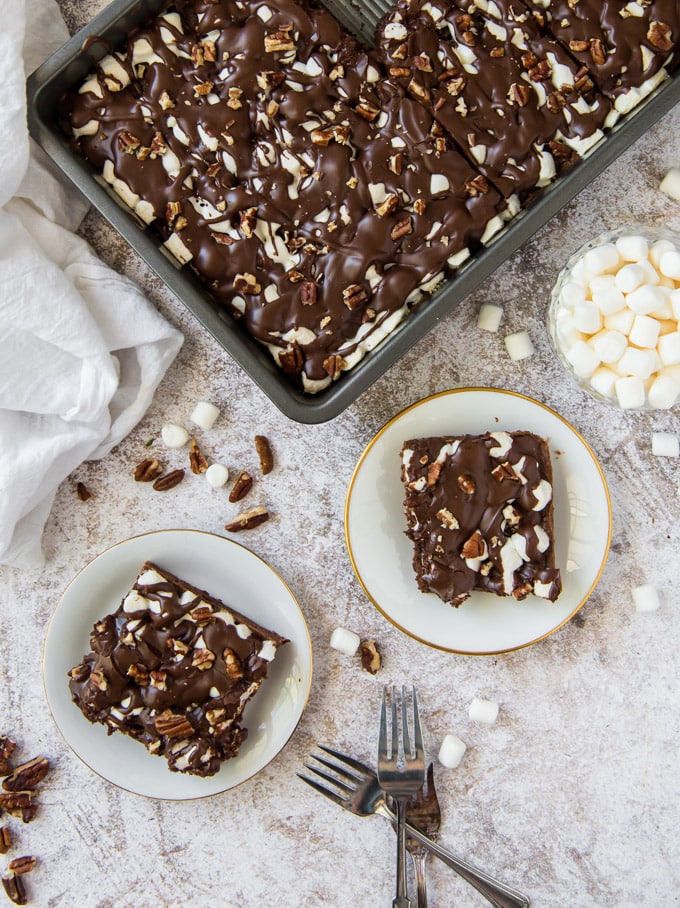 Mississippi Mud Cake is a classic recipe that’s been around for decades. The simple homemade cake base has a concentrated chocolate flavor with crunchy pecans mixed in. It’s similar to a Texas Sheet Cake that’s been amped up with the addition of gooey marshmallows and a rich chocolate glaze.

What is Mississippi Mud Cake?

When you cut into this cake, you know it’s something special. It’s got a dense, fudgy, and almost brownie-like texture unlike a traditional sheet cake, chewy marshmallows and a river of chocolate icing on top. We top it with pecans to match the nuts on the inside of the cake, but they are optional and don’t have to be added.

The name comes from “mud pies” you might remember making in the backyard as a kid. The chocolate glaze on top of this Mississippi Mud Cake resembles the cracks in the mud along the banks of the What is Mississippi River, similar to the mud pies or cakes I used to make in my grandma’s backyard with a bucket of water and plenty of dirt!

It’s thought to have been created by a home cook during WWII since it requires mostly pantry staples and easy to find ingredients. 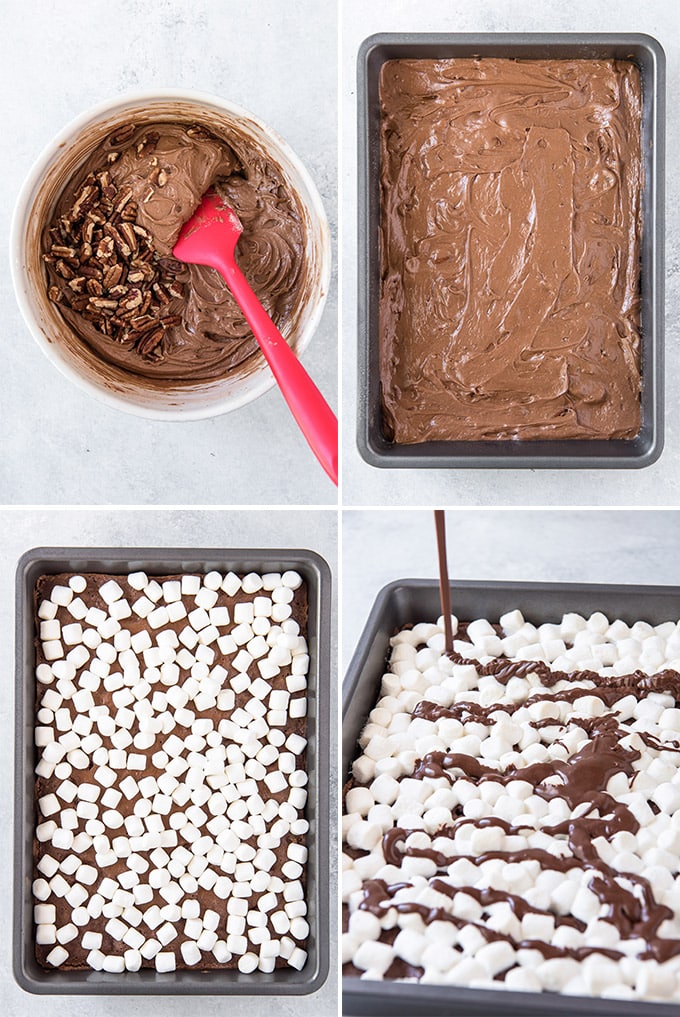 How to Make Mississippi Mud Cake 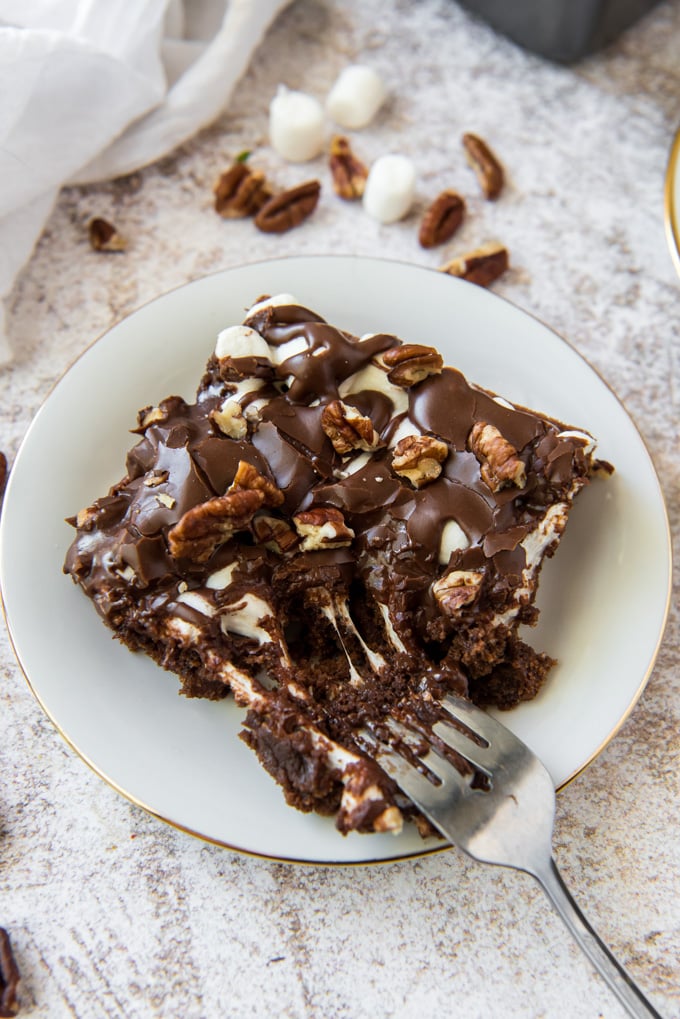 We’ve got lots of delicious cake recipes for you to try, and it you’ve looking to add more to your recipe box, try these popular ones: 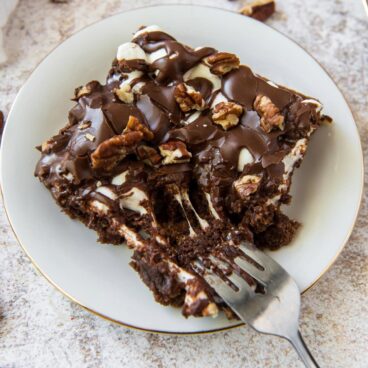 Calories: 266kcalCarbohydrates: 45gProtein: 3gFat: 10gSaturated Fat: 5gCholesterol: 48mgSodium: 114mgPotassium: 115mgFiber: 2gSugar: 36gVitamin A: 233IUCalcium: 29mgIron: 1mg
Keyword Mississippi mud cake
Have you tried this recipe?
Let us know how it was by leaving a review or sharing on Instagram with the tag #yellowblissroad 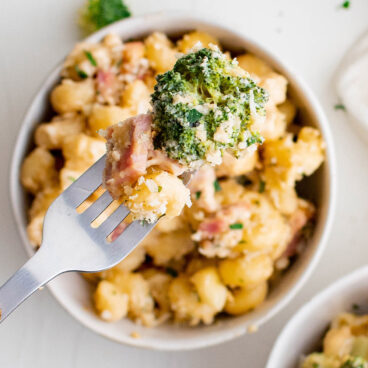 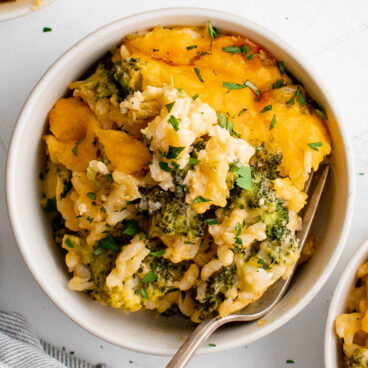 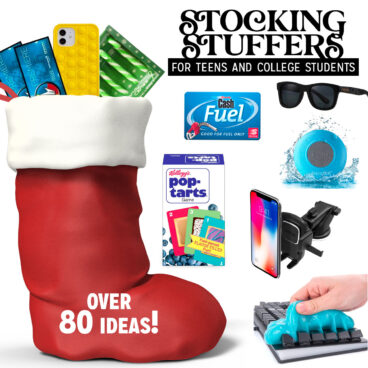