German Chocolate Cake Brownies combine a rich, dark chocolate brownie with a sweet and thick coconut pecan frosting. Named after the classic layer cake, these frosted brownies are easier to make and taste just as delicious!

I have a confession. I am a brownie snob. It has to be just the right texture, just the right chewiness, just the right amount of chocolate and sweetness. Unless of course those brownies are frosted. Then the frosting becomes the star and that is where we’re at with these German Chocolate Cake Brownies.

I love a good layer cake, like my Fresh Strawberry Cake, Vanilla Peach Layer Cake and my favorite Layered Citrus Cake. But the thing about cakes it they take time. Time to bake, time to cool, and time to frost. You have to be very delicate with the layer so they don’t break and leave you with a crumbly mess. Brownie bars to the rescue!

I’m a big fan of brownies too. Cream Cheese Brownies, Peppermint Patty Brownies, Nutella Brownies all have their charms, but these German Chocolate Cake Brownies have earned a nostalgic place in my heart and in my recipe box.

What is German Chocolate Cake?

German Chocolate Cake is a layered chocolate cake with a sweet coconut pecan frosting. While it may sound as though it has international roots, it was actually created by an American baker, Samuel German, who develop the dark baking chocolate that is traditionally used as it’s base. The cake was named after him. German Chocolate Cake has a dark, rich flavor, and is less sweet than traditional chocolate cakes. The bitter-sweet cake is the perfect contrast for the super sweet coconut frosting. 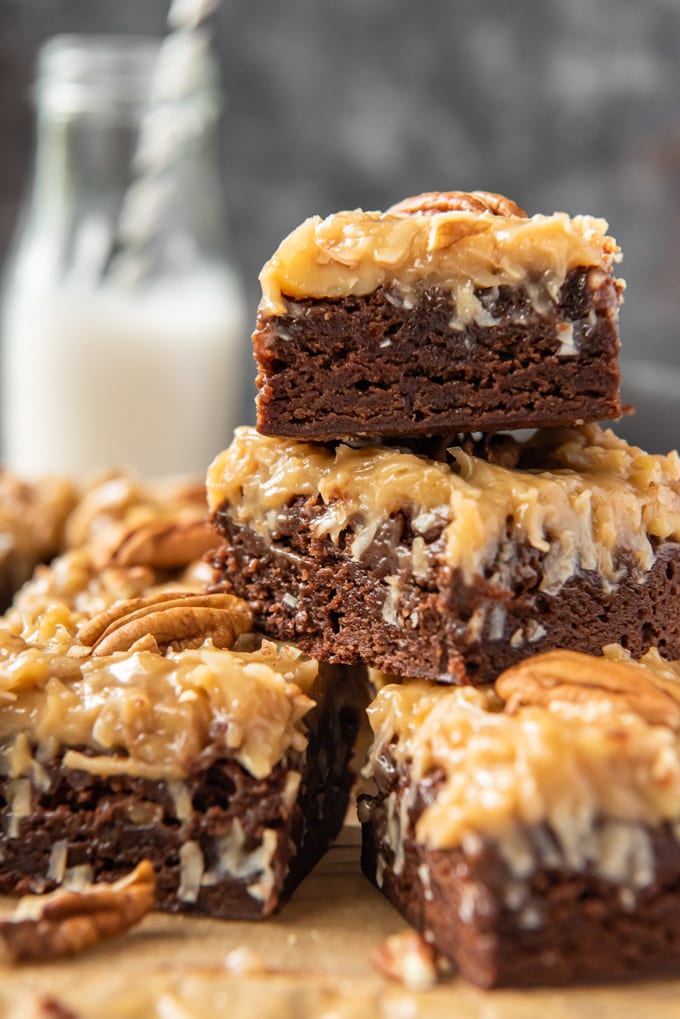 Brownie are one of the easiest desserts to make, and we are going to dress them up to make them even more special. 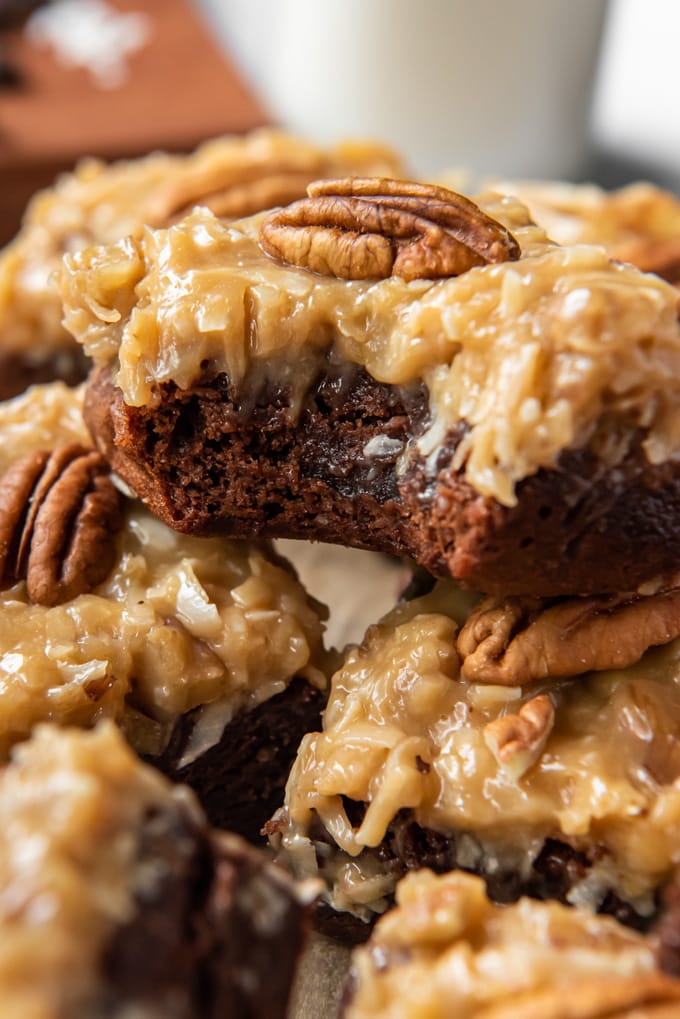 When you have brownies, you’ve got to have milk! Pour some milk in bottles of even stemless wine glasses to make everyone feel fancy while they eat these super fancy German Chocolate Cake Brownies! I added some whole pecans to the top of each square to make them a little extra.

What to do with leftovers?

Store leftover German Chocolate Cake Brownies in an airtight container in the fridge for up to 1 week. Freeze for up to 6 months.

Need more chocolate? These should help: 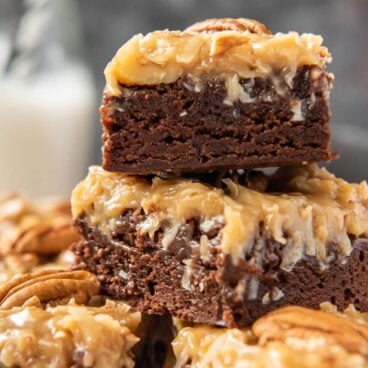 Calories: 204kcalCarbohydrates: 13gProtein: 3gFat: 16gSaturated Fat: 10gCholesterol: 46mgSodium: 57mgPotassium: 121mgFiber: 2gSugar: 11gVitamin A: 190IUVitamin C: 1mgCalcium: 43mgIron: 1mg
Have you tried this recipe?
Let us know how it was by leaving a review or sharing on Instagram with the tag #yellowblissroad 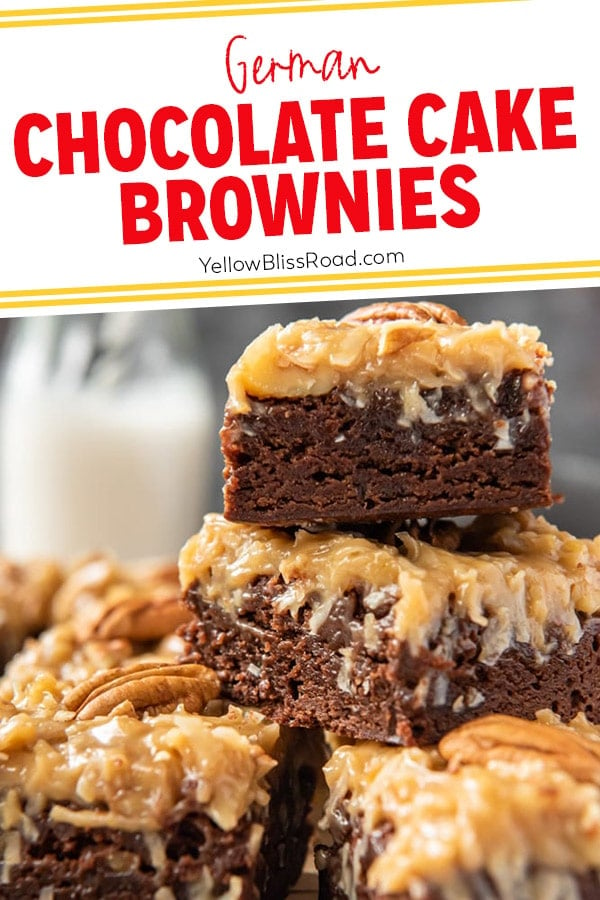 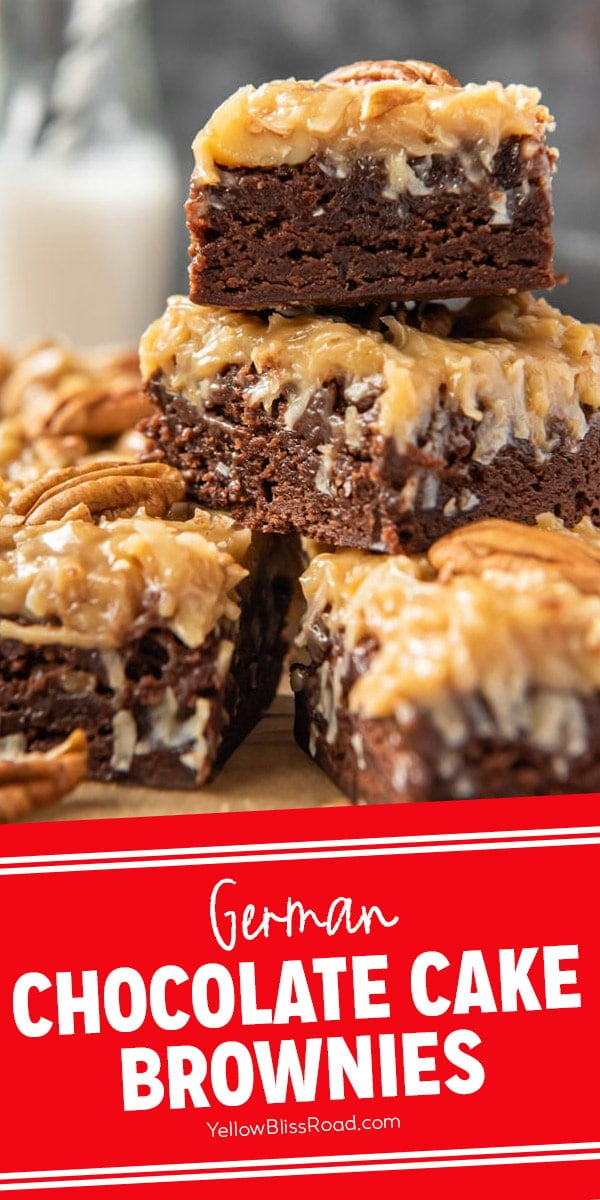