I hosted a Charlie Brown themed Christmas party over the weekend (more details to come later this week) and I wanted to serve a dessert that went along with the theme. When I stumbled upon a special recipe for Peppermint Patty Brownies, I knew I had hit the jackpot!

You can’t go wrong with brownies, but stuff them with York Peppermint Patties? That’s a sure winner! They are rich and decadent, with a cool, chewy peppermint center.

HOW TO MAKE PEPPERMINT PATTY BROWNIES

I found the recipe at Six Sisters, who actually took it from Eat At Allie’s who adapted it from somewhere else. I also found the same recipe on All Recipes so there’s no way to know where it actually originated (I hate that!). However, Six Sisters offered a “box mix” alternative, so I thought I would try that. I had to play around with it a little bit, because following the package directions like they said, did not work, and only managed to completely burn the candy.

You could click over to one of the other blogs if you want to make your brownies from scratch, but I will share how I made them from a pre-packaged mix, aka the lazy way.

These brownies are intended to be ooey-gooey. They may take longer to bake, so use the times given as a guide. Check for doneness with a toothpick inserted into the brownie part (not the candy).

I mentioned this is a simple recipe, and it uses a boxed brownie mix. I almost feel guilty calling it a recipe! However, the secret is in the method; more on that later.

I would suggest making at least two batches, because chances are, when you serve these, they will be gone before you get to have one!

Want to make the brownies from scratch? Try my Easy One Bowl Brownies! 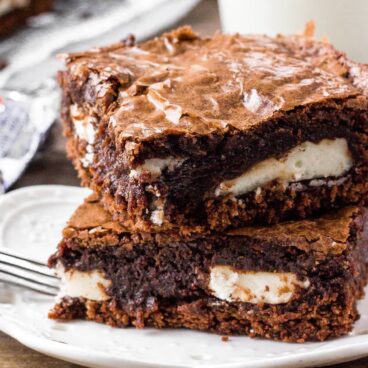 These brownies are intended to be ooey-gooey. They may take longer to bake, so use the times given as a guide. Check for doneness with a toothpick inserted into the brownie part (not the candy).

Calories: 384kcalCarbohydrates: 63gProtein: 3gFat: 15gSaturated Fat: 9gCholesterol: 17mgSodium: 98mgPotassium: 63mgFiber: 1gSugar: 46gVitamin A: 27IUCalcium: 8mgIron: 1mg
Have you tried this recipe?
Let us know how it was by leaving a review or sharing on Instagram with the tag #yellowblissroad