Slow Cooker Mississippi Pot Roast takes five simple ingredients and turns it into one of the most flavorful – possibly the very best – pot roast you’ve ever had. Serve it over mashed potatoes with a side of roasted carrots for the ultimate comfort food.

If you haven’t had Mississippi Pot Roast, I’ve got a treat for you. I waited too long to make it for the first time and now I’m kicking myself because I’ve been missing out.

It takes all of five minutes to throw this roast into the slow cooker.

You’ll sprinkle the roast with some ranch dressing mix, a packet of au jus mix, some pepperoncini and some juice from the peppers, a little bit of butter, and that’s it! Cover it and let it do its thing for the next eight hours.

Because you make it in the slow cooker, it falls apart, while the pepperoncini and juice add just a slight kick to it. The gravy that it makes, combining the slightly spicy pepper juice with the butter, ranch, and au jus mix is next level good.

Why Is It Called Mississippi Pot Roast?

Supposedly, this recipe traces back to Ripley, Mississippi in the 1990s. A woman named Robin was given a roast recipe and she adapted it to fit her kids’ preferences. She passed her version along to a friend, who submitted it to a church cookbook and it took off from there.

Should You Sear The Roast First?

Some people like to sear the roast before putting it in the slow cooker, but I don’t think it’s necessary. To me, it defeats the ease of a slow cooker recipe. Searing the roast at a high temperature will create a bit of a crust but it’s not a necessary step.

How To Make Mississippi Pot Roast

Making this roast requires hardly any effort, and it’s simple enough to put together in 5 minutes before work. I especially like to throw it into the slow cooker on a Sunday morning and go about my day.

I like to serve Mississippi Pot Roast and gravy over Mashed Potatoes with a side of Roasted Carrots, Garlic Green Beans, or Sauteed Asparagus but on its own, it is low carb and you could serve it with Cauliflower Mac & Cheese to keep that theme. 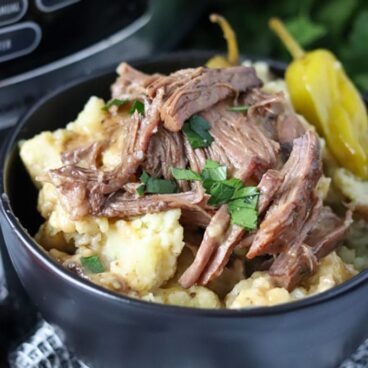 If you want to cook potatoes and/or carrots with the roast, add them in during the last two hours of cook time.

Serving: 1gCalories: 356kcalCarbohydrates: 3gProtein: 29gFat: 25gSaturated Fat: 12gCholesterol: 125mgSodium: 542mgPotassium: 528mgFiber: 1gSugar: 1gVitamin A: 291IUVitamin C: 10mgCalcium: 28mgIron: 3mg
Have you tried this recipe?
Let us know how it was by leaving a review or sharing on Instagram with the tag #yellowblissroad 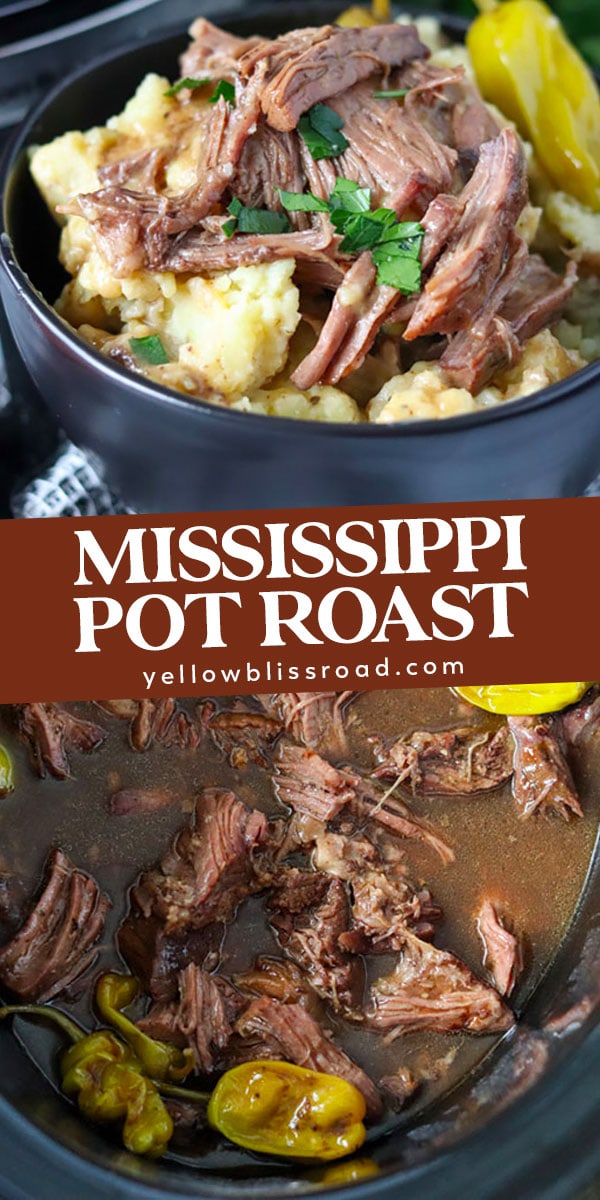 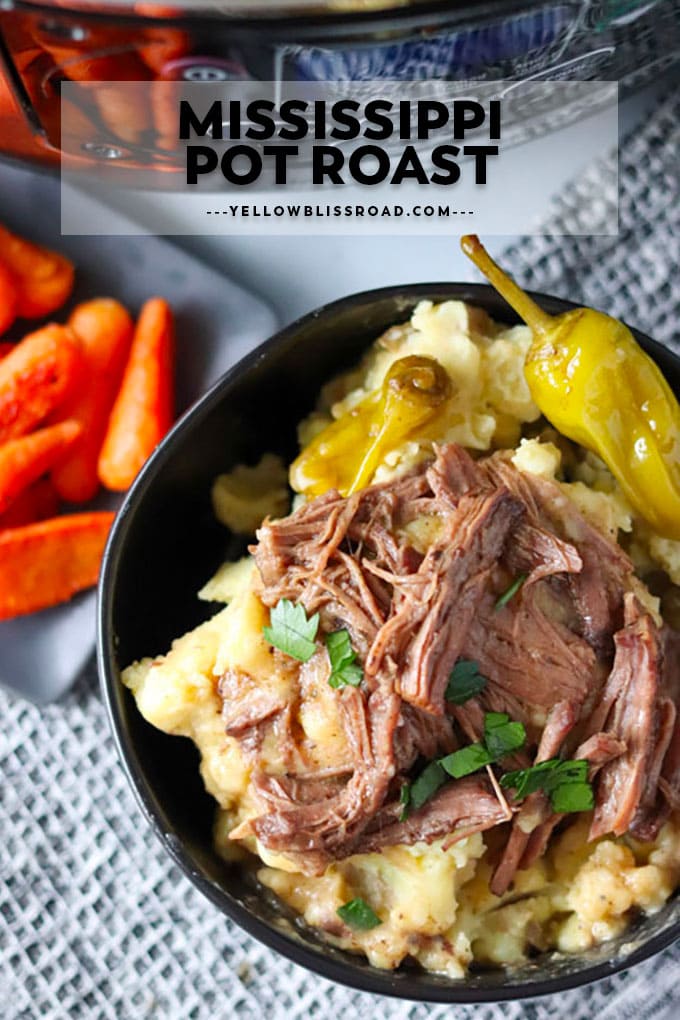 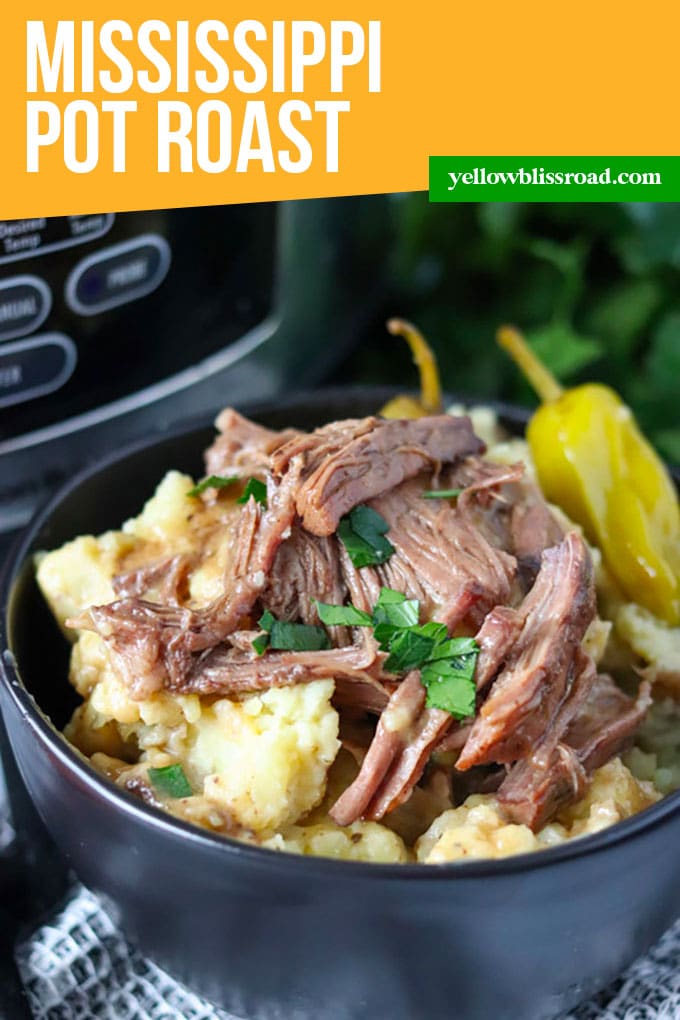 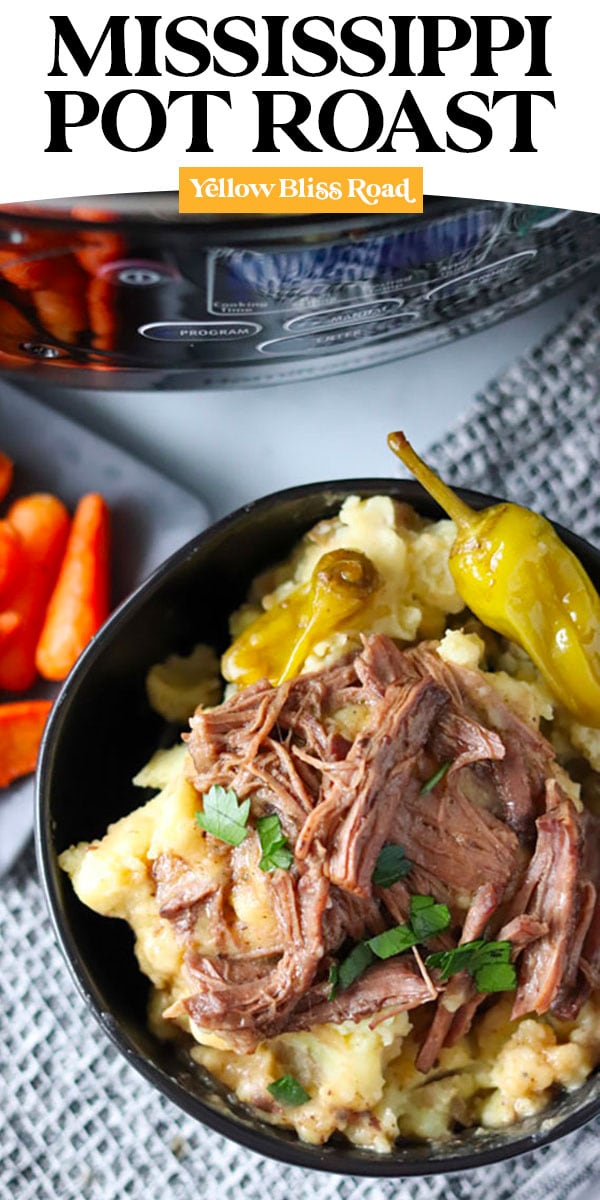 Melissa Williams is the creator of Persnickety Plates where she shares simple, family friendly recipes with everyday ingredients. She especially loves to bake and rarely meets a cookie she doesn’t like. This wife and mom of two girls aims to share recipes that are quick and easy because even though life is busy, there’s always time for good food.