Split Pea Soup with Bacon is comfort food at it’s finest, with a crunchy, salty twist. A thick and creamy, split pea base is loaded with veggies, seasonings and lots of bacon for a delicious meal that is perfect with a side of grilled cheese. 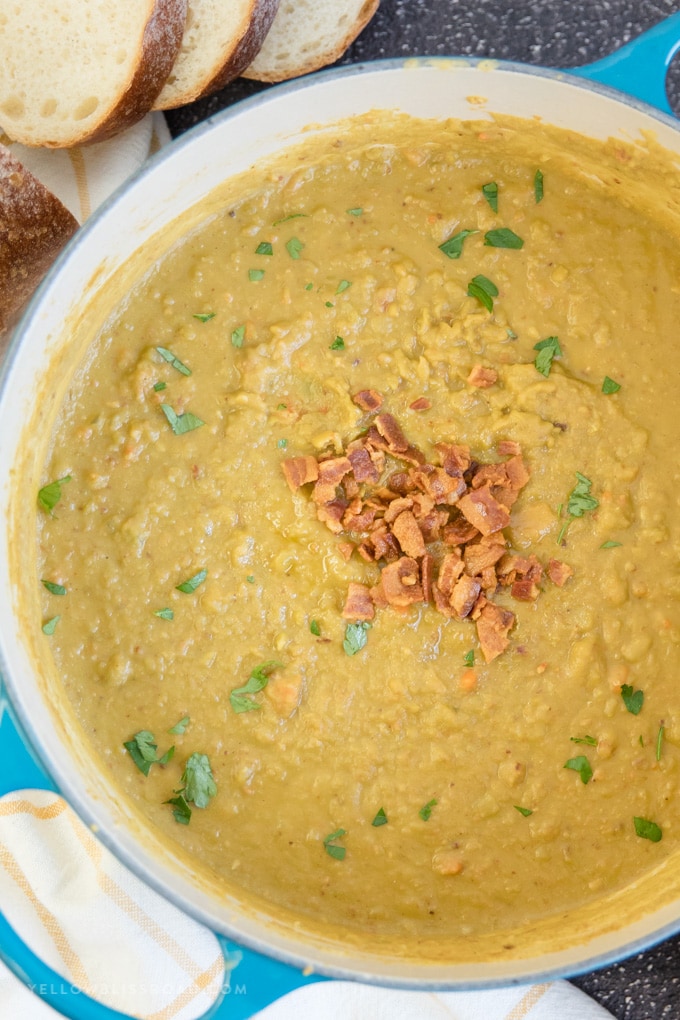 It’s soup season, my favorite time of the year! I love it when the weather turns colder and we can truly enjoy delicious homemade soups, like Chicken Minestrone Soup, Hamburger Soup, or Smoky Vegetable Beef Soup. My kids, when asked, will always answer “what’s your favorite food?” with “SOUP!” Well, more specifically they will answer “Mom’s soup” because it’s one of my favorite meals to cook and to eat. Soups are very customizable, and I love just throwing in things I have on hand and calling it a meal. This Split Pea Soup recipe is my new favorite.

When I was a kid there was a local restaurant called Pea Soup Andersens. Until recently I thought my family just called it that because they are known for pea soup…turns out that IS what they are known for but it’s also the actual name of the restaurant! There was on the way home from Grandma’s house from us and we’d venture there a couple of times a year. They had the best pea soup around, and we’d eat bowl after bowl.

WHAT ARE SPLIT PEAS?

Split peas are field peas that have been harvested, dried and split in half to be used for cooking. They come in sweet green or a mild yellow varieties.

As with lentils, split peas do not need to be soaked overnight and they only take about an hour to cook. You do want to make sure to rinse and take a good look at the peas, sorting through them to pick out any stones that may have been mixed into the bag.

When cooked, split peas become quite soft and have almost a pureed texture. Split peas also have great nutritional benefits as they are low in fat, packed with fiber and protein, and are a good source of several vitamins and minerals. 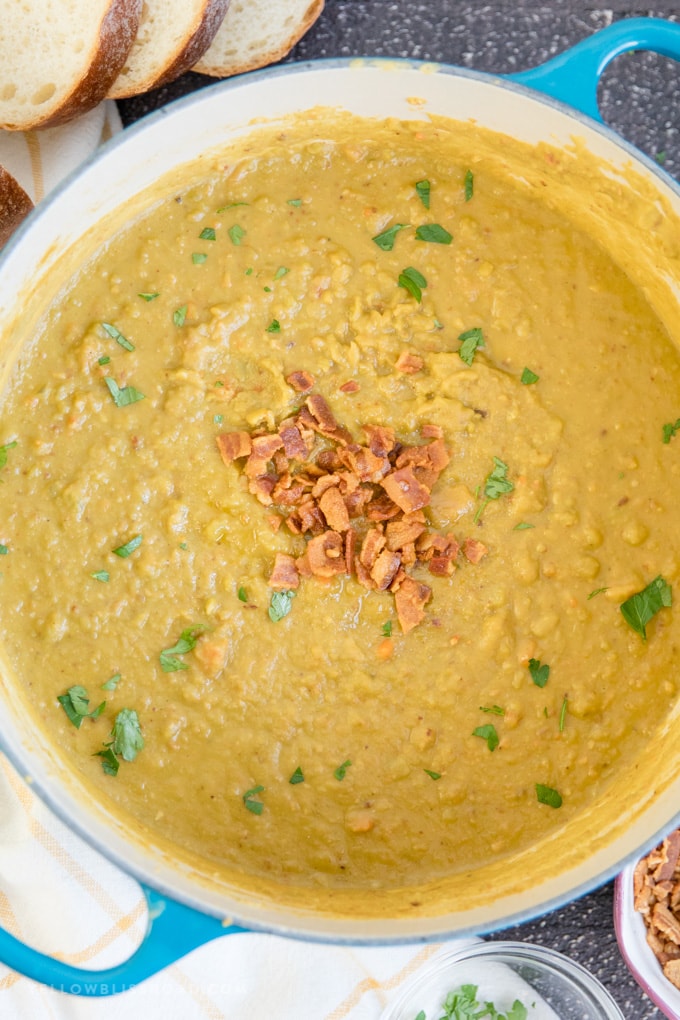 There are not a bunch of wild and crazy ingredients in this soup, which helps it to rise to the top of the favorites list. I do like my split pea soup nice and thick, so if you prefer a thinner soup you’ll want to use more broth or thin with water. Here’s what you’ll need: 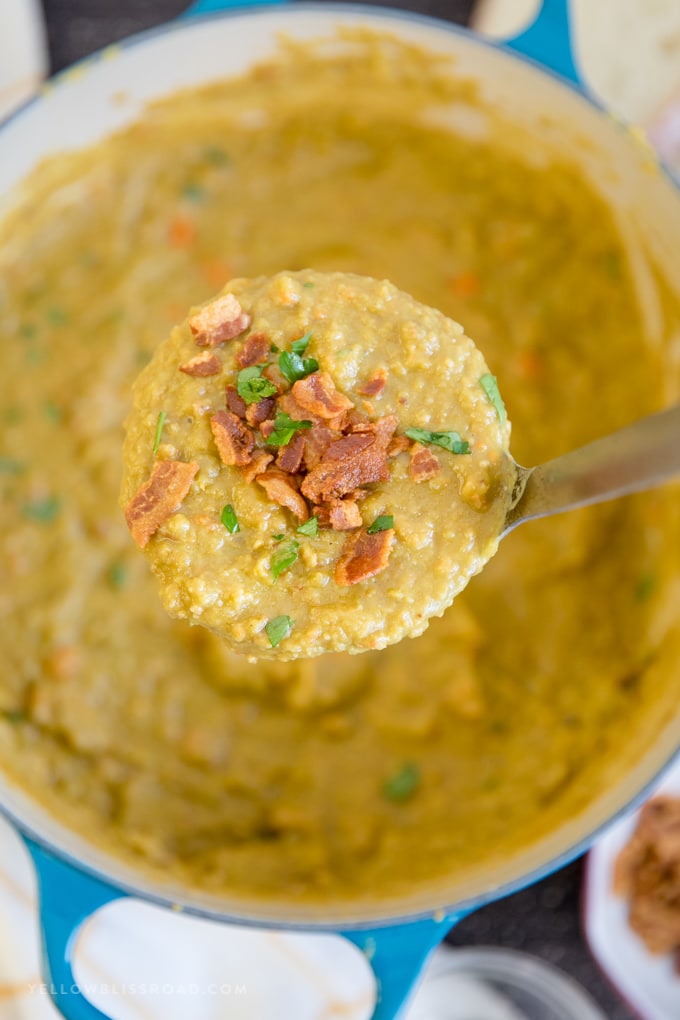 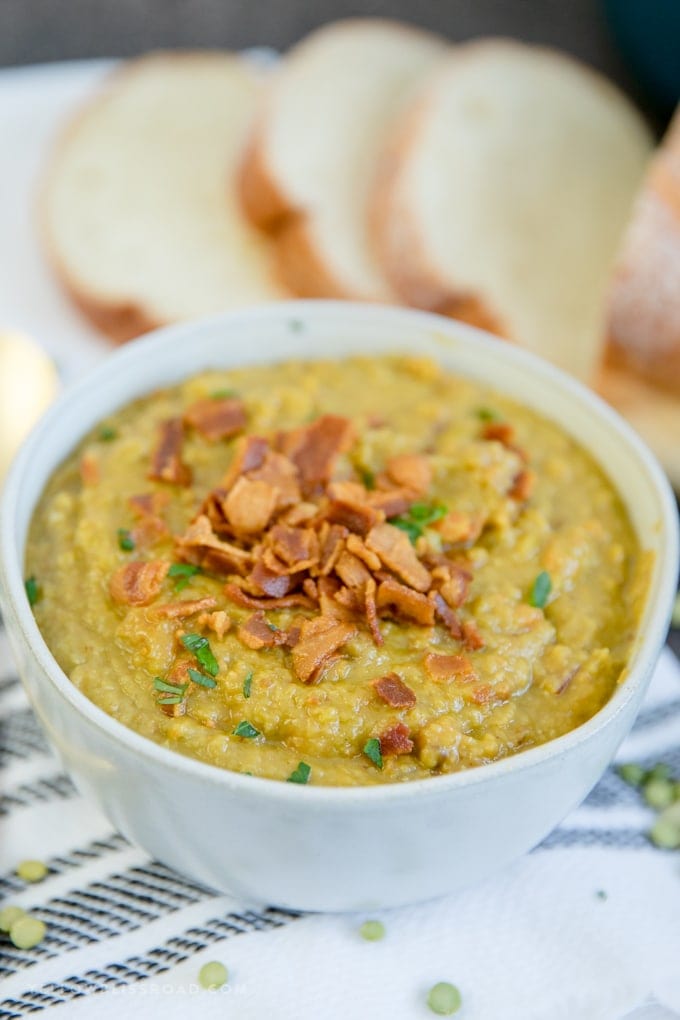 HOW TO SERVE AND STORE SPLIT PEA SOUP WITH BACON

Split pea soup is a delicious meal on it’s own, rich with flavor from the veggies and bacon. We do love to top our soup with croutons and serve it with some grilled cheese or cheesy garlic bread. 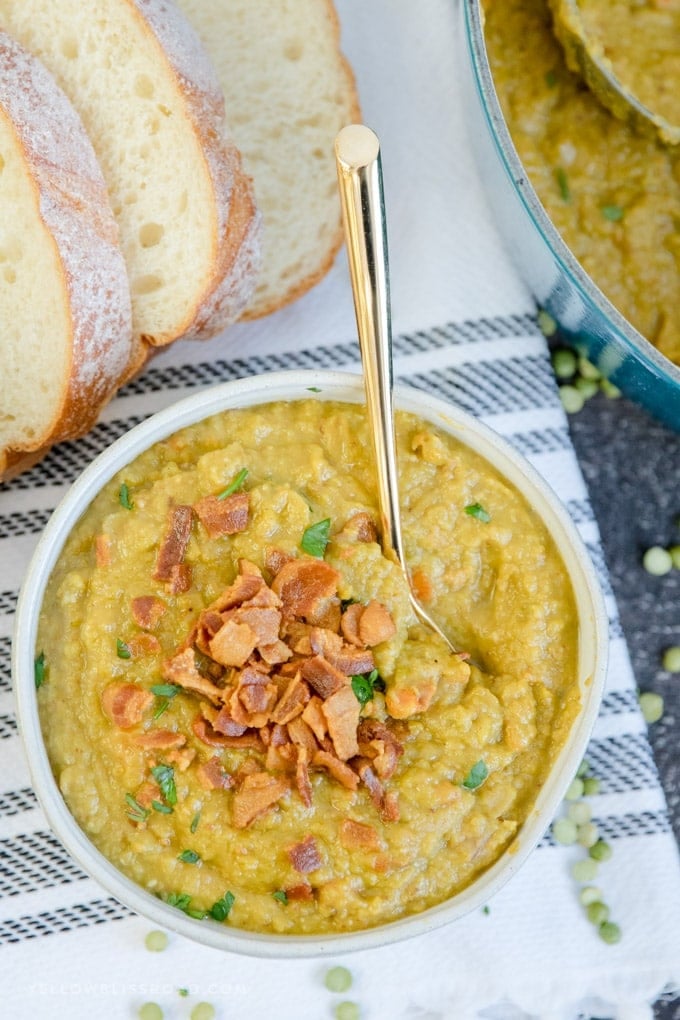 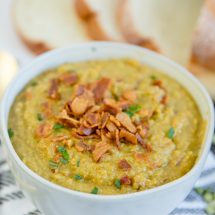