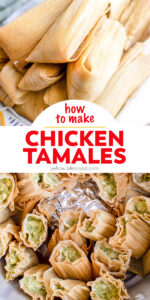 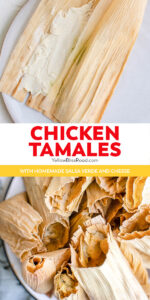 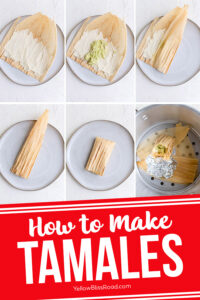 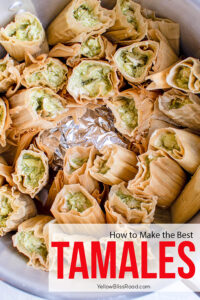 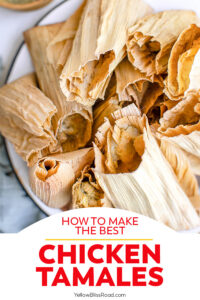 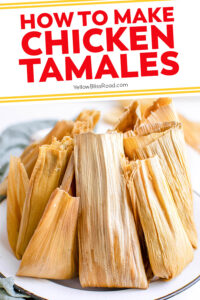 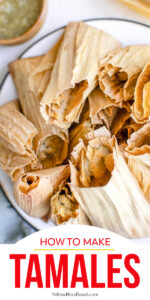 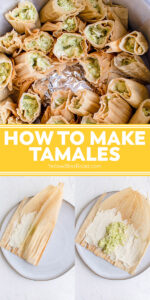 Learn how to make tamales with my easy recipe and step by step instructions. Green Chile Chicken Tamales are made with shredded chicken and a homemade tomatillo salsa wrapped in masa dough then steamed in corn husks for a perfectly tender, flavorful tamale that everyone will love. 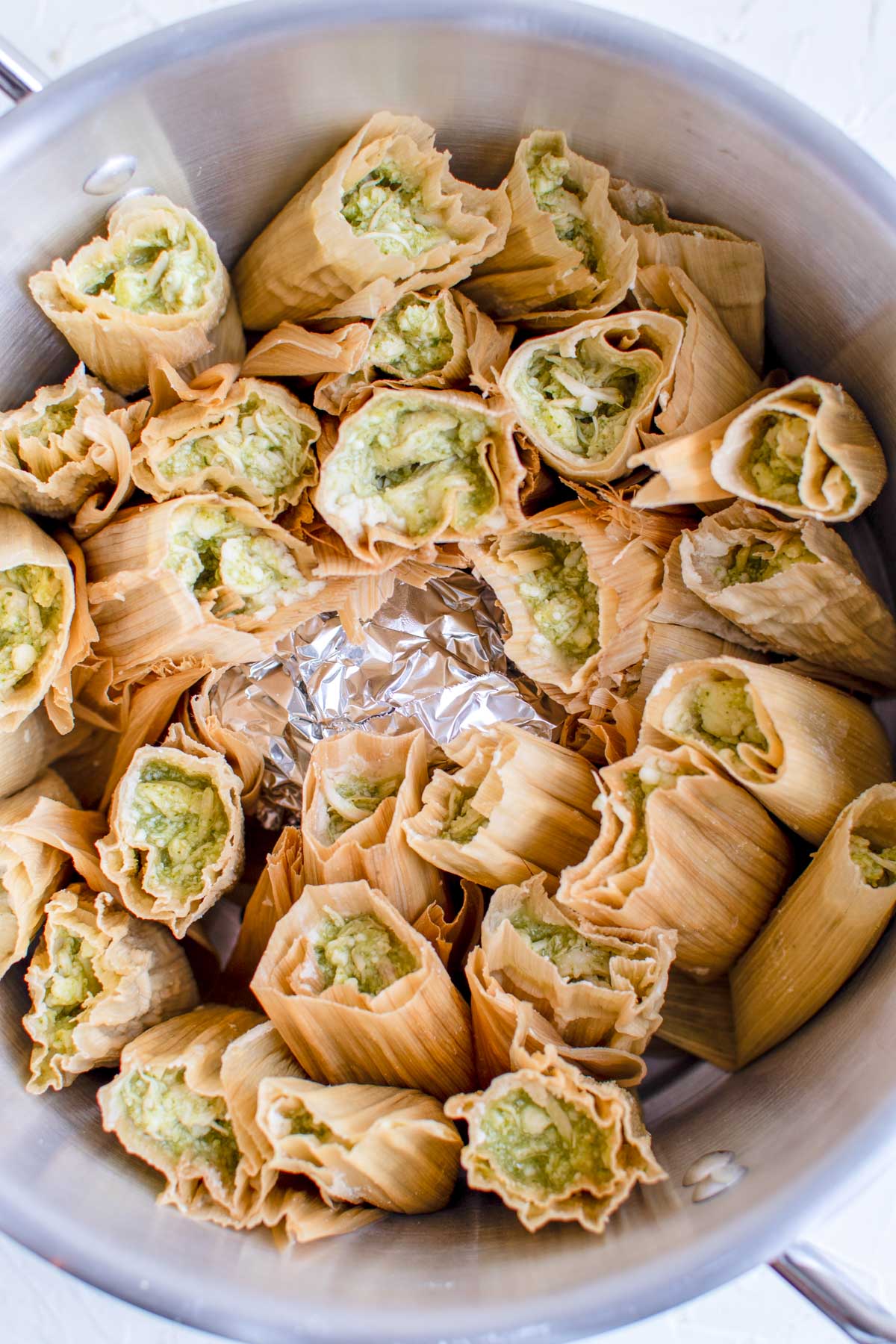 You can easily swap out the filling for shredded beef or shredded Carnitas pork, or even do a simple and meatless green chile and cheese filling. Sweet fillings include fruit preserves, raisins, pineapple and nuts.

What are Tamales made of?

Popular especially around the holidays, tamales feature a corn-based dough, or “masa,” wrapped around a filling and steamed in a corn husk. The filling is traditionally chicken, beef or pork, but sweet tamales or cheese filled are also popular. Chicken tamales are my favorite!

Are tamales hard to make?

I have always been intimidated by the process of making tamales. After following this recipe, I realized that it’s actually pretty easy. There are a lot of steps and it does take some time, which can make it seem like a daunting task. One tip I have is to cut the process into two parts, making the chicken and sauce one day, storing in the fridge, then making the masa and steaming the tamales the next day. 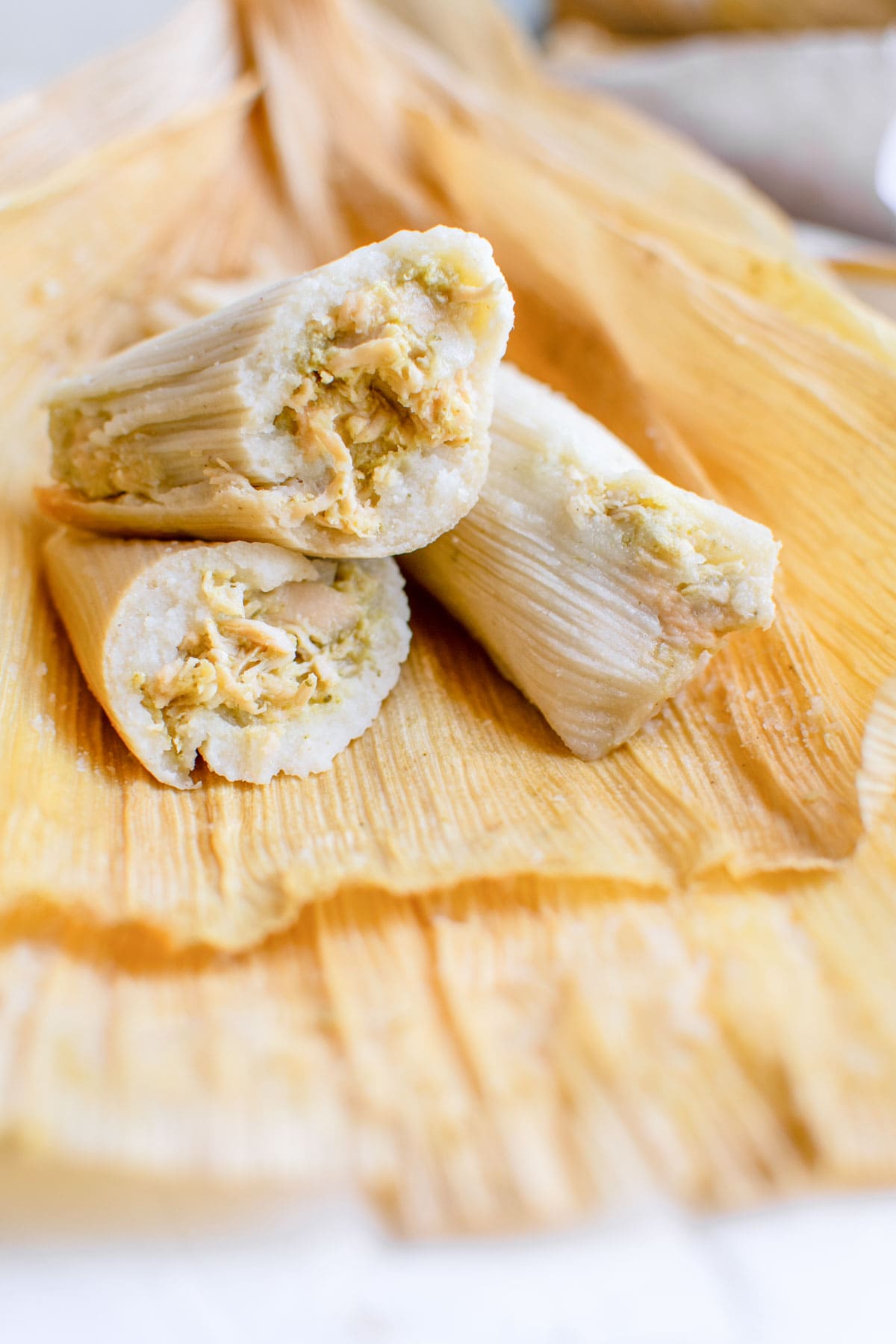 How to Make Chicken Tamales from Scratch

While there are quite a few steps to making these green chile chicken tamales from scratch, they aren’t difficult to make. There are a number of shortcuts you can take as well, and I’ll include those in the notes below. Here I will break down the recipe into easily manageable chunks.

You can find the corn husks on Amazon, at most grocery stores in the Mexican aisle and at Mexican markets. They seem to also be readily available at Walmart. A 6-ounce package should contain 20-30 husks but could vary by brand.

The husks need to be softened so they can be easily wrapped around the tamale. Separate the husks, remove any fine strands and soak them in boiling water (off of the heat) for about an hour.

This filling is made with poached chicken and a homemade tomatillo salsa. To save time you could use a rotisserie chicken or make a big batch of shredded chicken in the instant pot or slow cooker. You will need about 3 cups of meat, preferably chicken breast but dark meat works too.

Tomatillo salsa is made by boiling tomatillos, onions, garlic, peppers and chicken broth, then blending the softened veggies with cilantro. The sauce is then mixed with the shredded chicken and some queso fresco to form the filling.

The dough that forms the tamale shell is made from instant yellow corn flour. The base of the recipe, and what binds it together, is vegetable shortening or lard. The shortening is usually found in the aisle with the oils. If you are concerned about using this ingredient, Crisco brand has no trans fats so it’s the best option. If you really don’t want to use shortening, or can’t find it, you can use regular vegetable oil. Just beat it with the dry ingredients, then slowly add the broth like the recipe states.

Once the dough is formed, keep it covered with a damp paper towel so it won’t dry out as you work. Spread a couple tablespoons of the dough onto each cornhusk, then add the filling and wrap. 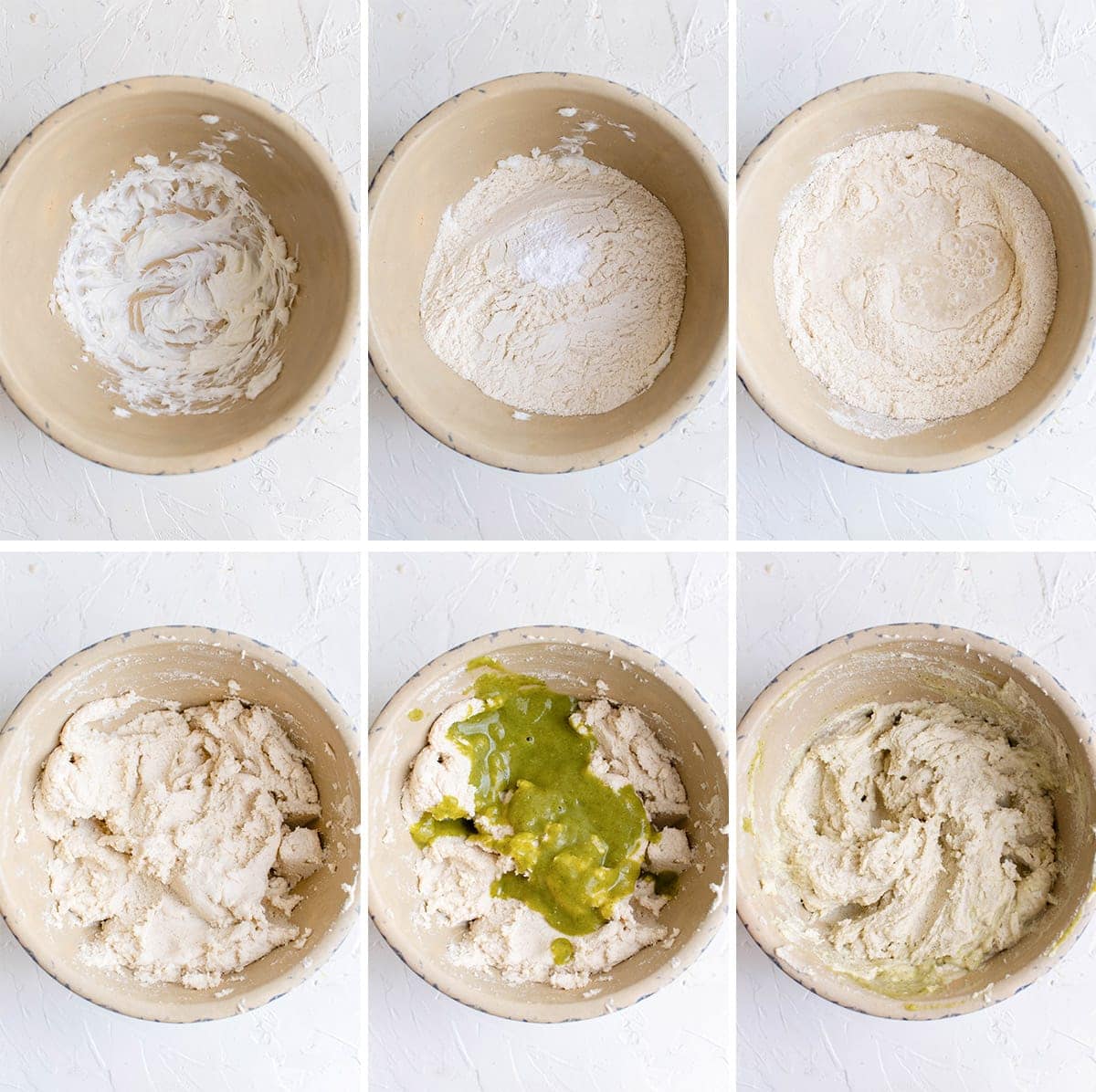 How to Steam Tamales

Stand up filled and wrapped chicken tamales in a large pot with a steamer basket at the bottom. I placed a ball of foil in the center which helps to keep the chicken tamales standing in case they don’t fill the pot and also helps air to circulate. If you are making a double batch and can fill the pot, omit the foil. Fill with water, just to the base of the steamer basket, bring to a boil and cover. Continue added water as needed if it starts to run out, and cook for about an hour.

An important note to remember is that the tamales should never be sitting in water. They will get mushy instead of tender and fluffy. 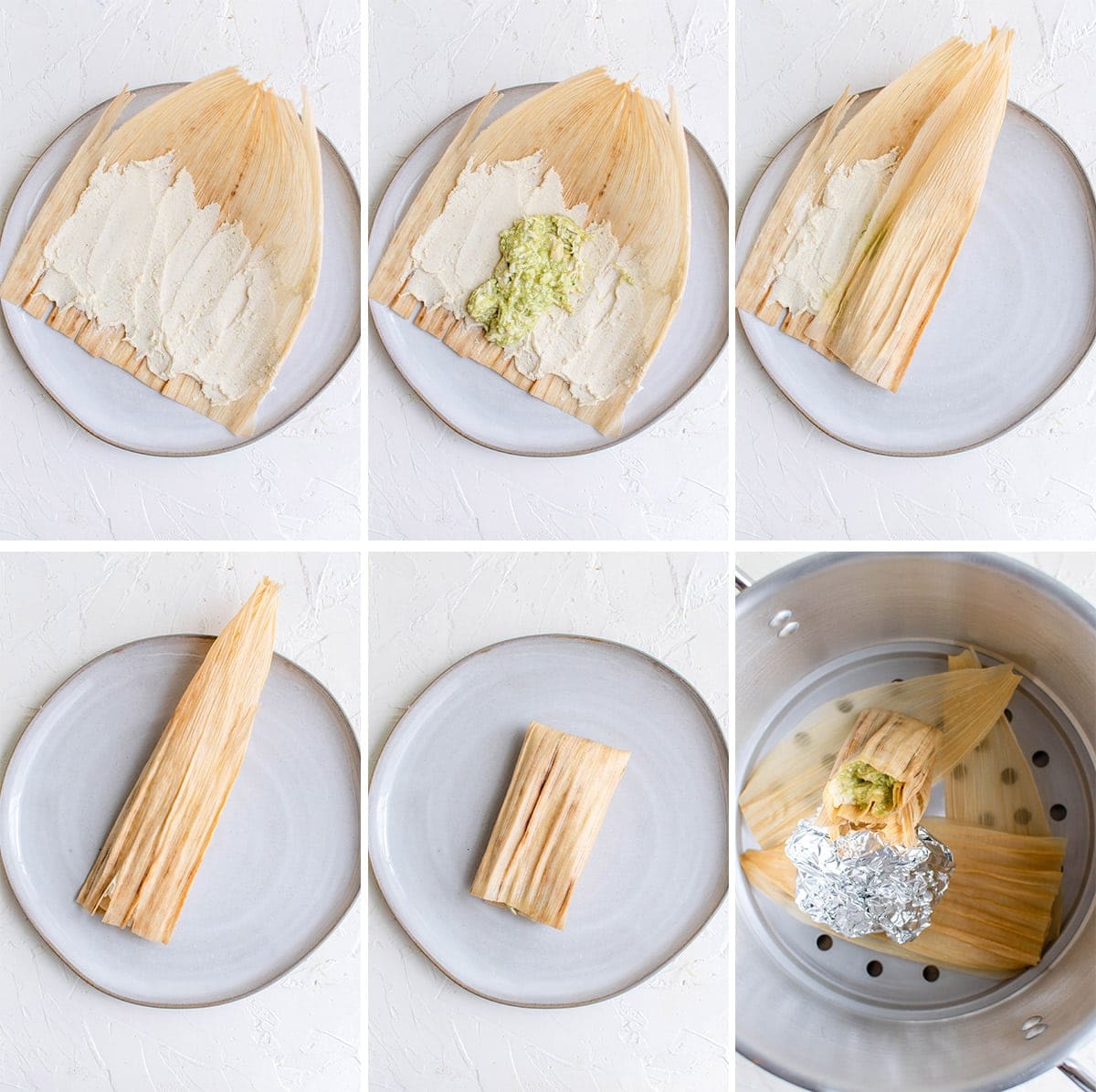 Other Ways to Cook Tamales

Slow Cooker Tamales – Layer tamales in the slow cooker, seam side down. Cook on high for 4-6 hours. The outer ones will cook a little faster. Test for doneness by pulling the husk away – if it separates easily, it’s ready.

Instant Pot Tamales – Add a cup of water to the bottom of your Instant Pot or pressure cooker, then add a steamer basket. Fill the pot with your tamales, open side up, and steam for 20 minutes. Do a high pressure, natural release and check for doneness. 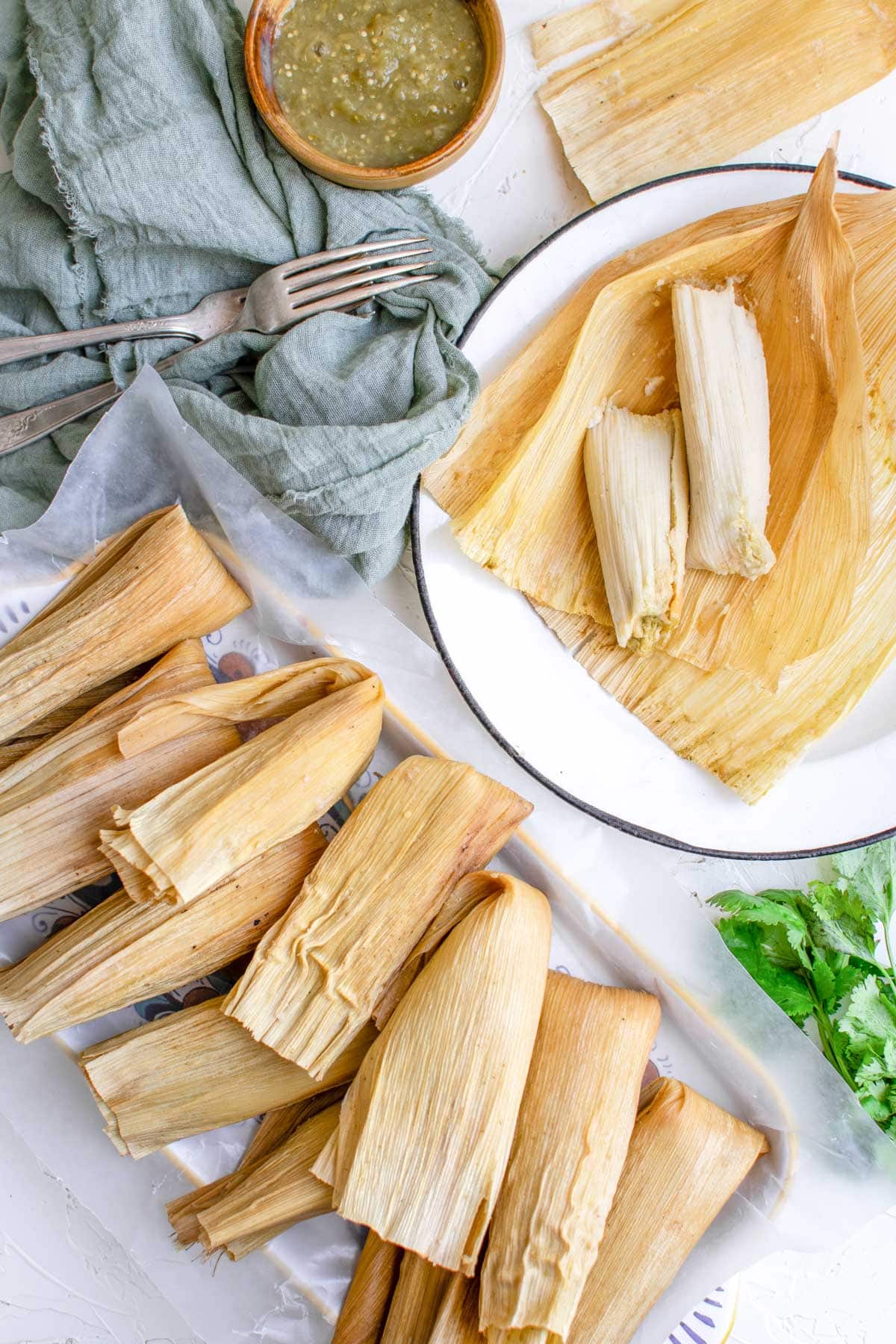 Serve Chicken Tamales with these favorite Mexican Side Dishes:

For dessert, try some Homemade Horchata or Fried Ice Cream! 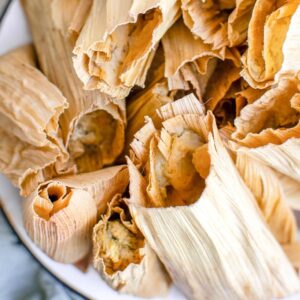 Tamale Assembly (visual instructions are included in the post)