This Enchilada Skillet with ground beef and black beans is just as tasty as classic enchiladas but so much easier to make. It’s ready in a fraction of the time, making this a perfect busy weeknight dinner. 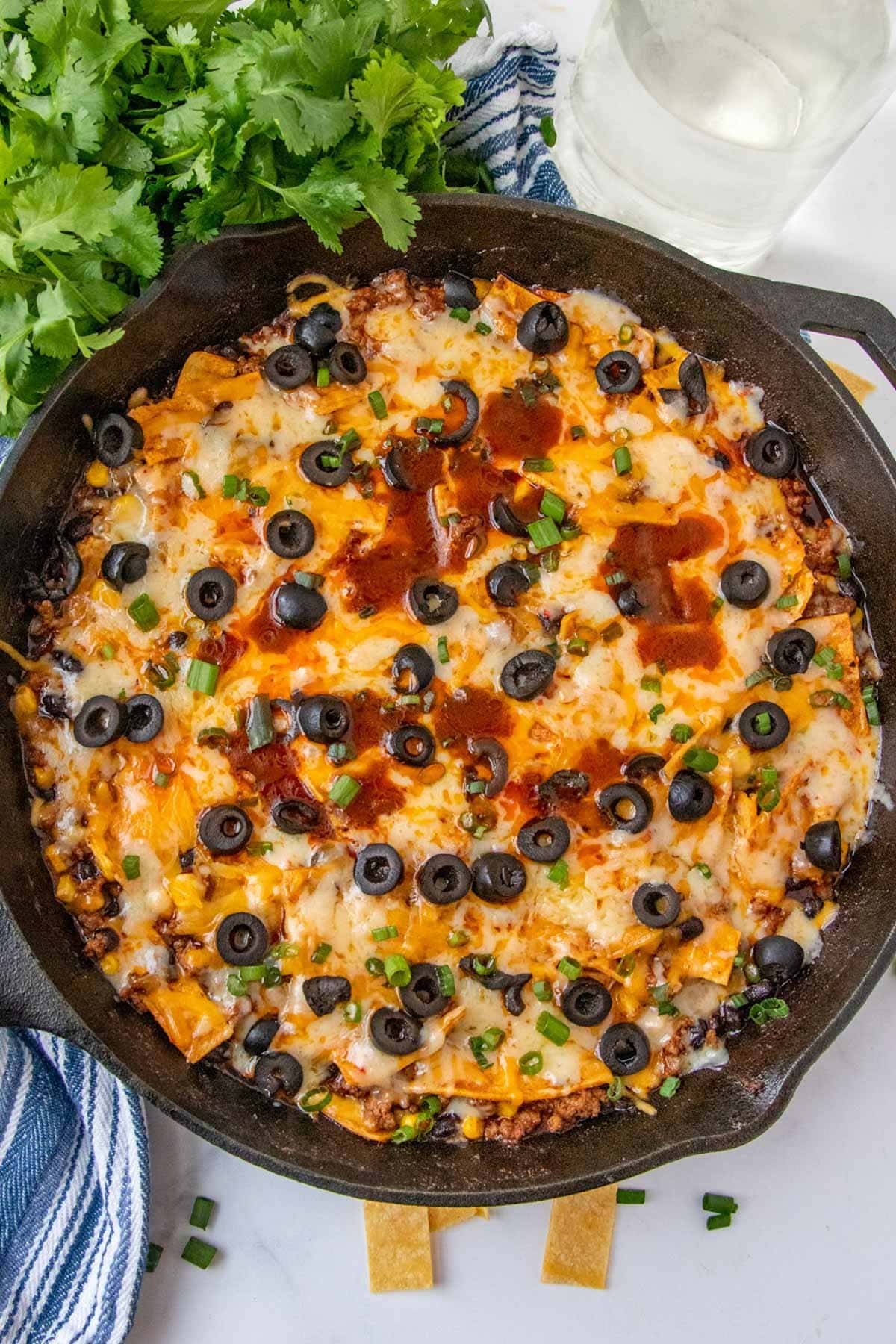 While I absolutely love good old fashioned Ground Beef Enchiladas, they do take some work. So when the craving hits but I don’t want to spend hours making them, this effortless enchilada skillet recipe comes to the rescue! It’s one of our favorite easy Mexican recipes, and I always serve it up with some Mexican Rice and Mexican Street Corn Salad for a quick meal that’s not short on flavor.

What’s in an Enchilada Skillet?

Simple ingredients, incredible flavor. That’s what this dish is all about! 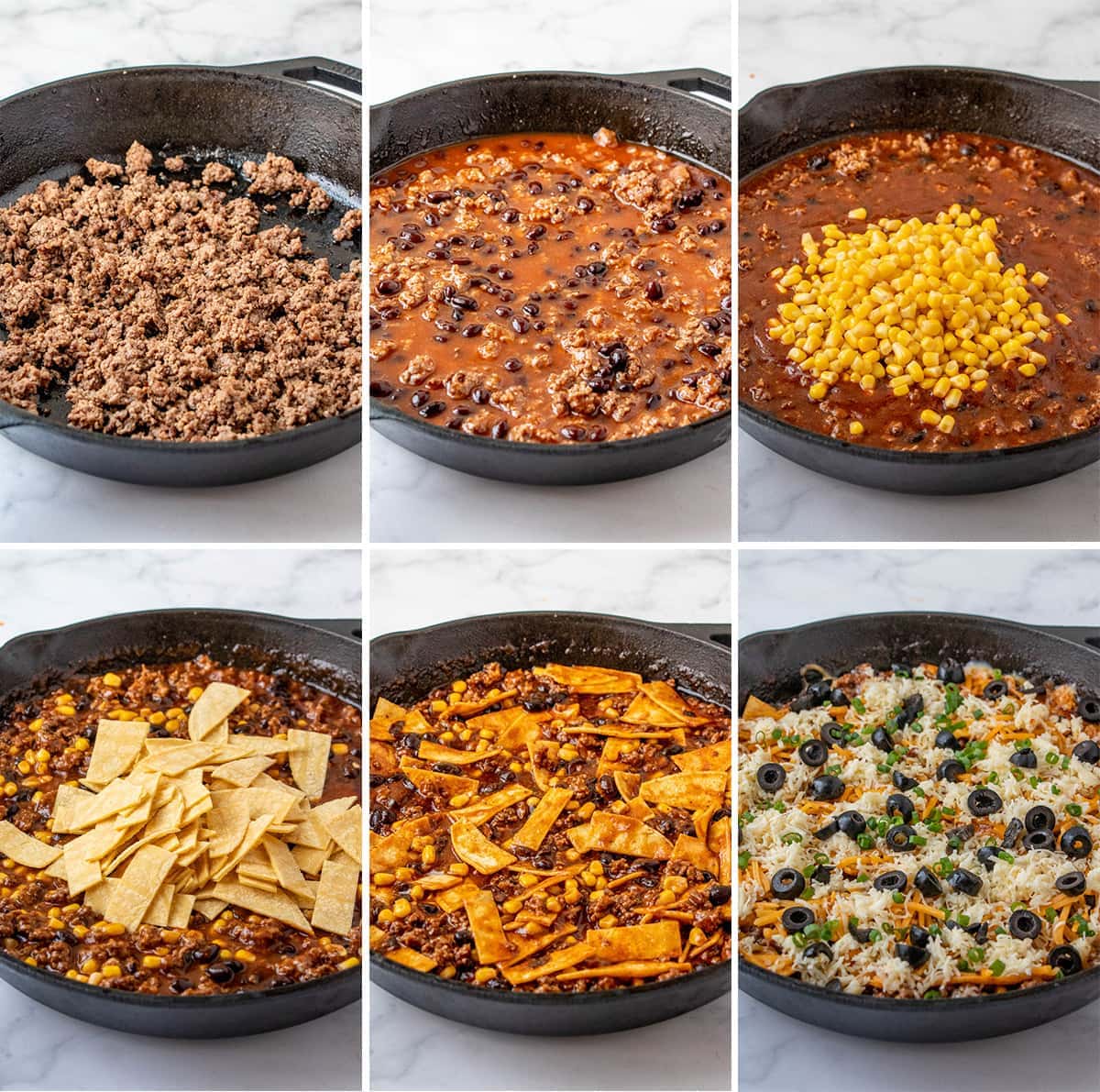 While ground beef is very forgiving, there are a few things to remember.

Hold off on seasoning until the end. If you season while the beef is cooking, when you drain off the grease you’ll drain the seasoning off with it.

Use the right fat content. For a skillet meal like this, use 85/15 or even 90/10 ground beef. You”ll be adding a lot of flavor with seasonings, so you don’t need the fat to flavor it as much, and if you’re adding a liquid, that will keep it juicy. For something like meatloaf or hamburgers, you can go with a high fat content, like 80/20. You need the fat to keep the meat juicy, and a lot of it will cook off so your finished dish isn’t super greasy.

How to drain ground beef. The easiest way to drain ground beef is to use paper towels. Grab about 5-6 paper towels and some tongs. Turn off the heat and carefully tilt the skillet to the side while pushing the meat to the other direction. Grab the paper towels with the tongs, and use them to soak up as much grease as possible. Have a trash can or a bowl nearby to drop the soaked towels in. If you don’t want to use this method, you can simply spoon the beef onto a paper towel lined plate then wipe out the skillet and replace the beef. 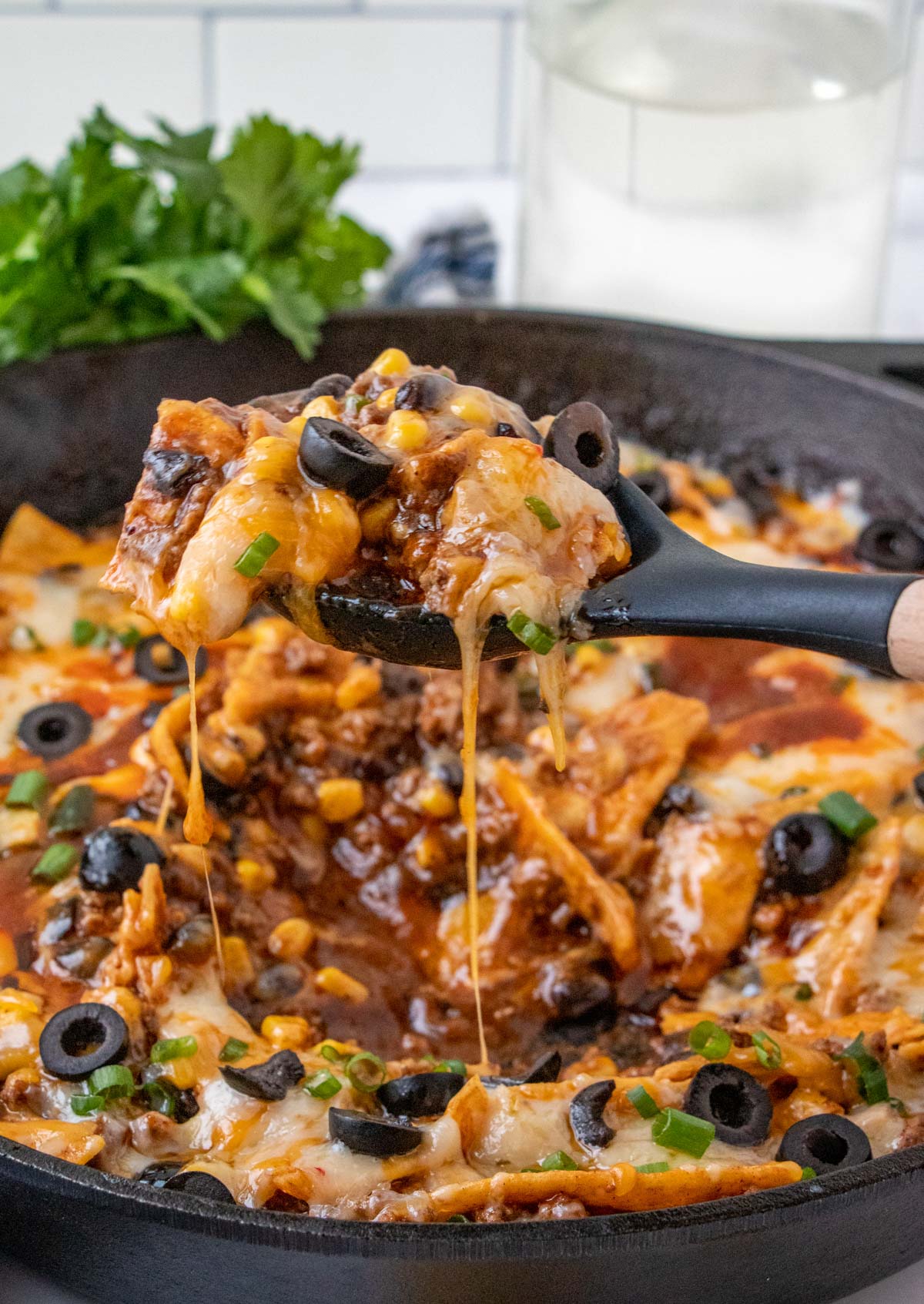 Make Ahead – I don’t really recommend making this ahead of time. It’s such a simple recipe that only takes about 20 minutes. If you need to prep ahead of time, you can cook the ground beef, sauce and beans, but don’t add the tortillas or cheese. Do that just before serving.

Storage – Store any leftovers in an airtight container in the refrigerator for up to 3-4 days. Reheat in the microwave.

Freezing – You can freeze skillet enchiladas for up to 3 months. However, because the corn tortillas are softened they may become mushy when reheating. If you want to make this ahead and freeze, add the tortillas and cheese when reheating. 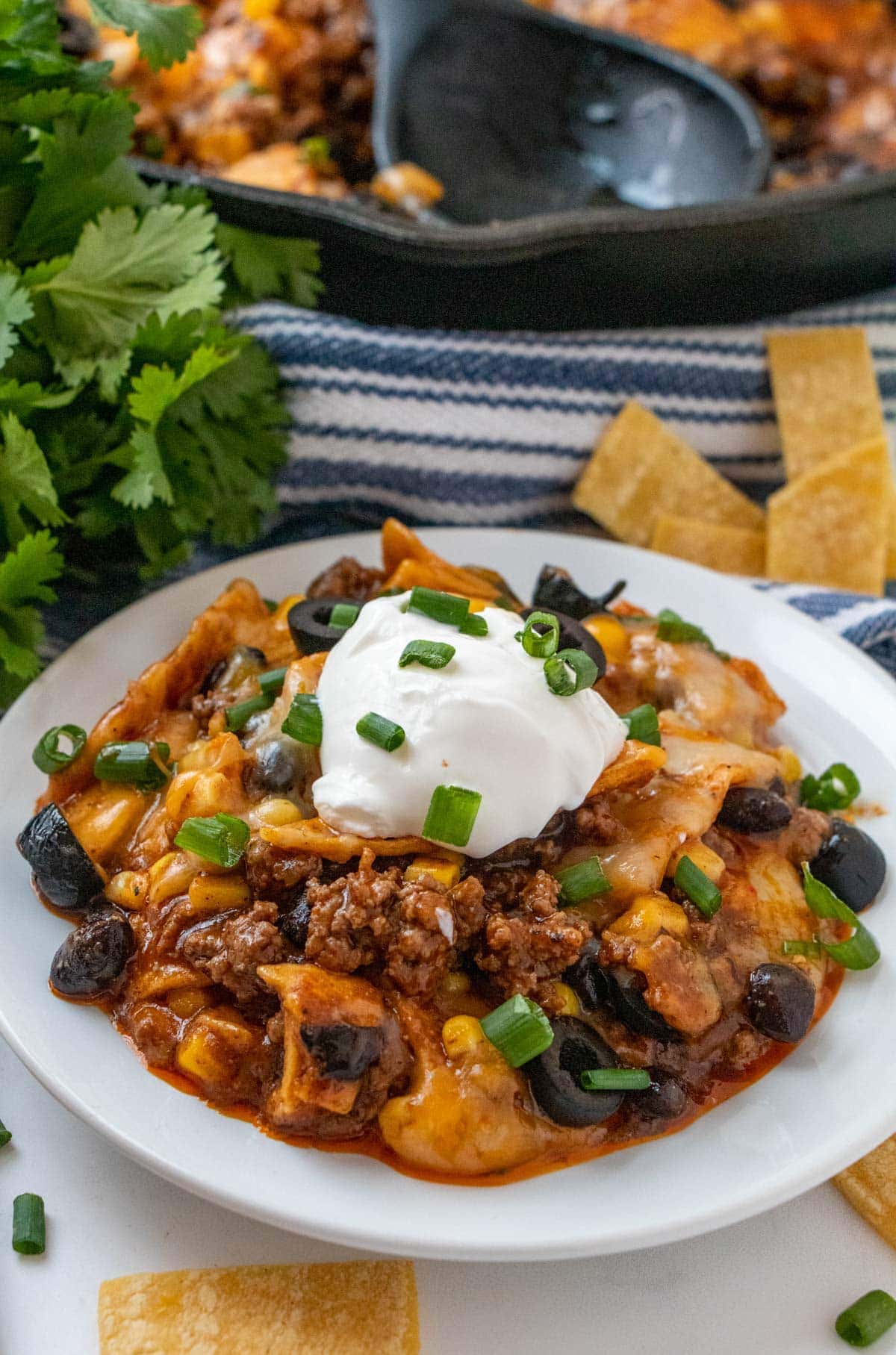 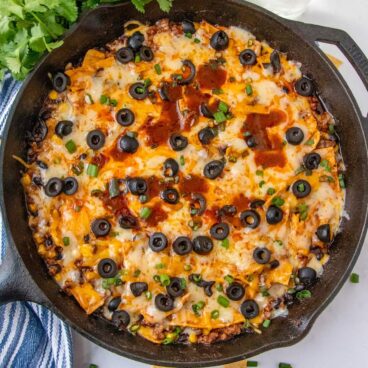 Calories: 493kcalCarbohydrates: 36gProtein: 31gFat: 25gSaturated Fat: 12gCholesterol: 88mgSodium: 1866mgPotassium: 589mgFiber: 9gSugar: 7gVitamin A: 1224IUVitamin C: 5mgCalcium: 339mgIron: 4mg
Have you tried this recipe?
Let us know how it was by leaving a review or sharing on Instagram with the tag #yellowblissroad 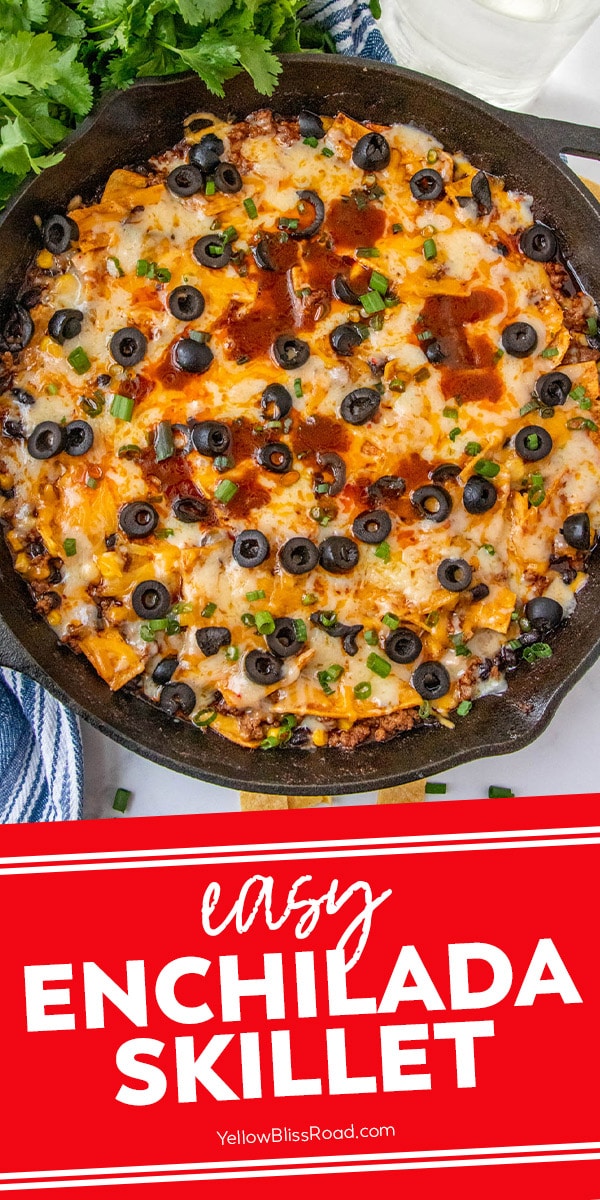 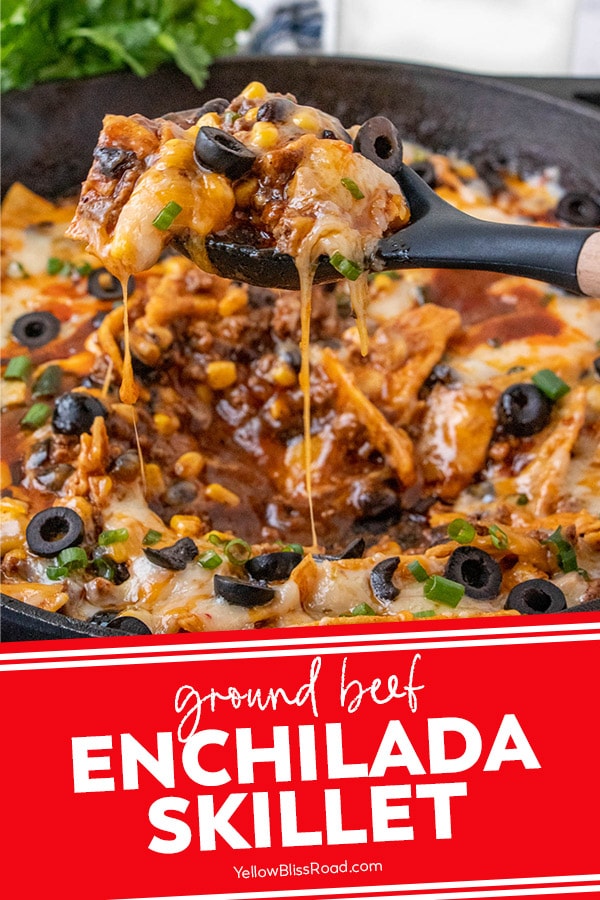 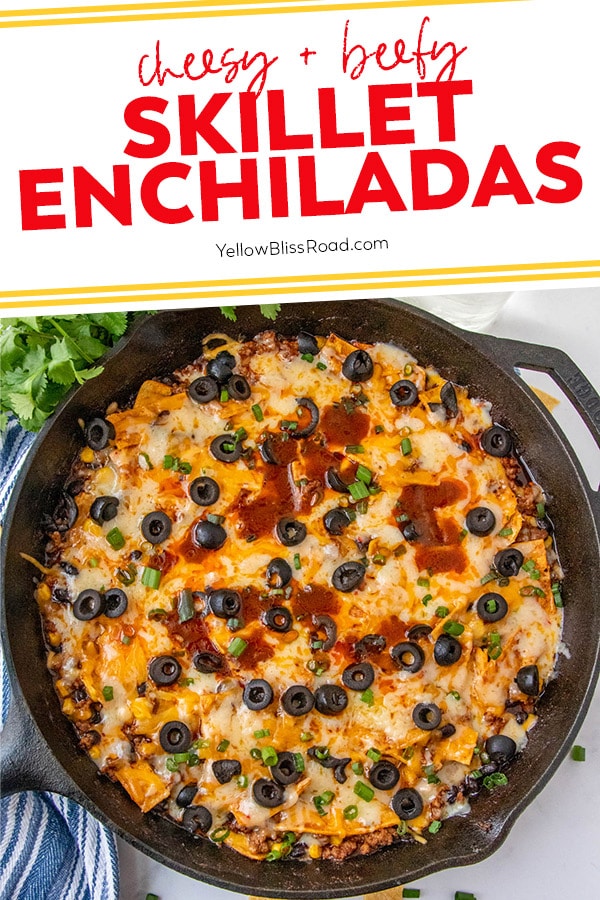 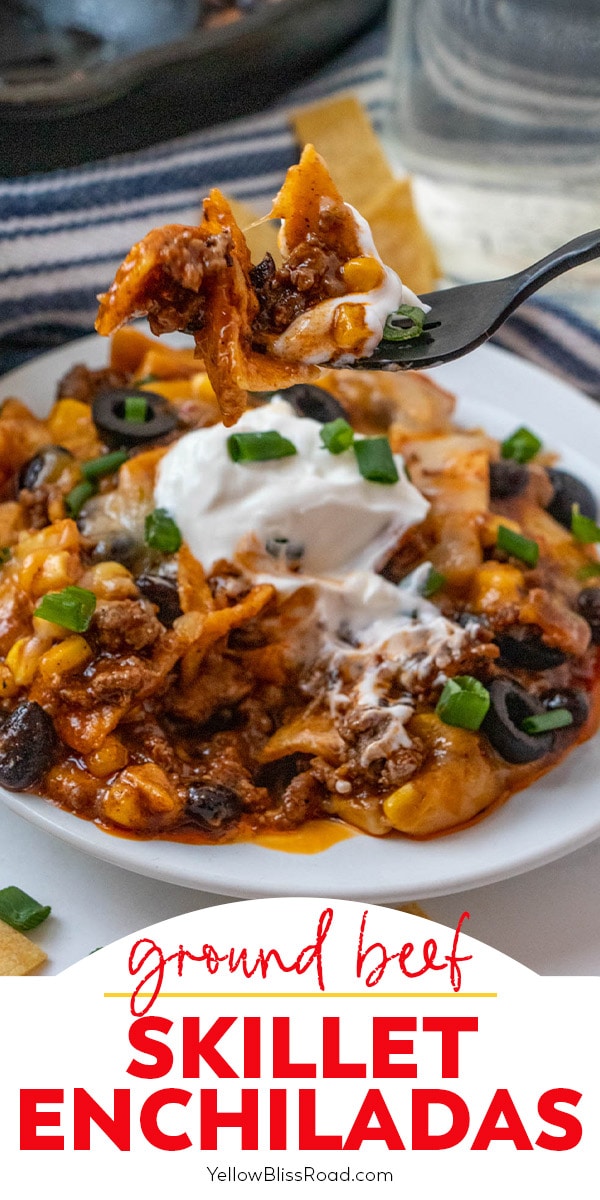