This Lemon, Asparagus and Bacon Pasta is easy to make and ready in about 30 minutes. It’s refreshingly light and full of flavor, with tender veggies, salty bacon and a tangy lemon sauce.

This rustic, elegant bacon pasta is an incredible meal on it’s own, but you can stretch it a little further if you serve it some of our favorite simple side dishes, like a copycat Olive Garden Salad and some crusty garlic bread.

This particular pasta dish has been on my mind for quite a while. It’s sort of a combination of my One Pan Spicy Lemon Chicken Pasta and a recipe I had come across for a simple pasta with bacon and asparagus. That pasta recipe reminded me of something my roommate and I would whip up late at night (or was it early in the morning??) years ago when we lived in a tiny apartment and would stay out waaay past our bedtimes.

The bacon and the asparagus in my fridge were calling my name on this particular day so I decided to whip this up. I had some juicy Roma tomatoes and of course tons of lemons (thank you lemon tree!). After making this dish the first time, I thought it needed just one more dimension of flavor so I added some red pepper flakes to help kick it up a notch.

Just a pinch of black pepper at the end finished it off. And then I finished off the whole plate. Unlike my typical one-pan meals, the pasta is cooked separately, however I think you could totally make it a one-pan by just increasing the amount of chicken stock (similar to the Spicy Lemon Pasta I mentioned earlier).

How to Make Lemon, Asparagus and Bacon Pasta

There are only a few steps and this Lemon Asparagus Bacon Pasta comes together pretty quickly. While the pasta is cooking, you’ll cook the bacon and asparagus and create a tangy, spicy sauce. The sauce will finish at about the same time as the pasta and then you just toss everything together!

This Bacon Pasta is so delicious, you may never eat another pasta dish again! But if you do want to try something else, here are a few of our favorite pasta recipes: 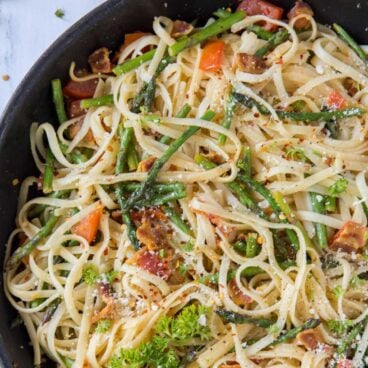 Any type of long pasta will work – spaghetti, bucatini, fettuccine. Even a shorter cut rotini or penne.

Calories: 502kcalCarbohydrates: 64gProtein: 20gFat: 19gSaturated Fat: 7gCholesterol: 31mgSodium: 422mgPotassium: 447mgFiber: 5gSugar: 5gVitamin A: 586IUVitamin C: 24mgCalcium: 139mgIron: 2mg
Have you tried this recipe?
Let us know how it was by leaving a review or sharing on Instagram with the tag #yellowblissroad