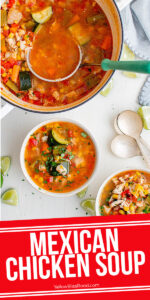 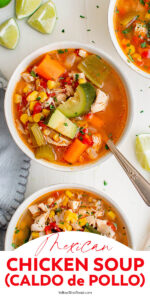 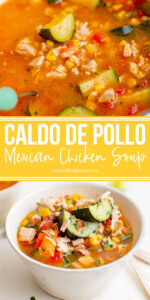 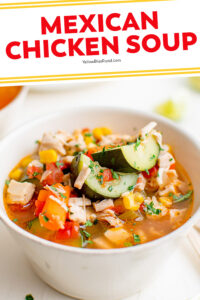 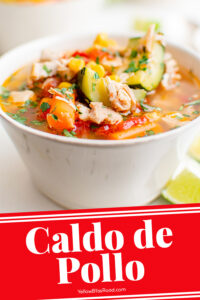 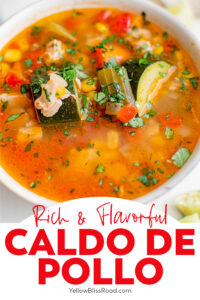 Caldo de Pollo is a simple, rustic Mexican chicken soup. From the rich and flavorful broth, to the tender chunks of chicken and veggies, every bite will warm your belly and warm your soul. 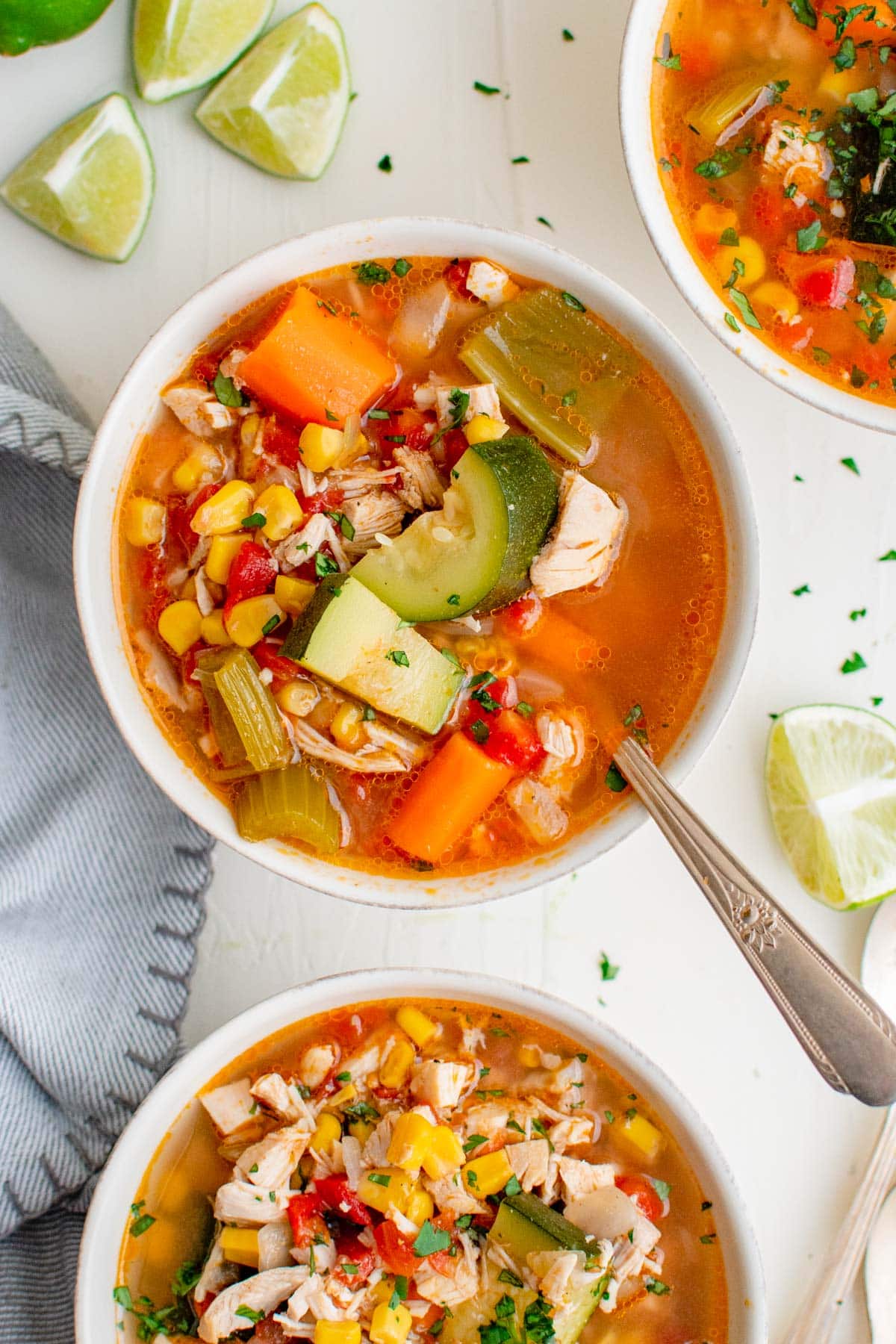 This Mexican inspired soup can be a satisfying meal on it’s own, or as the starter for your favorite Mexican recipes. Serve with Homemade Flour Tortillas, Air Fryer Tortilla Chips, or as a first course before Taco Stuffed Peppers.

What is Caldo de Pollo?

Caldo de Pollo is a traditional Mexican chicken soup with chicken, veggies, rice and spices. Simply put, caldo is spanish for “soup” and pollo is spanish for “chicken.” The actual recipe can vary greatly from region to region and even family to family.

For my version, I kept most of the authentic ingredients and added my own methods for getting great flavor. This soup is just a great big bowl of comfort food.

There is nothing more comforting than homemade chicken soup. It cures the common cold – the warm broth soothes a sore throat and the anti-inflammatory properties in the broth have been known to reduce congestion.

Chicken broth is naturally low in calories and low in fat. It’s packed full of nutritious veggies and the added chicken provides a good dose of protein. Plus it just makes you feel good.

The main ingredients are probably already in your kitchen. That’s how easy it is! 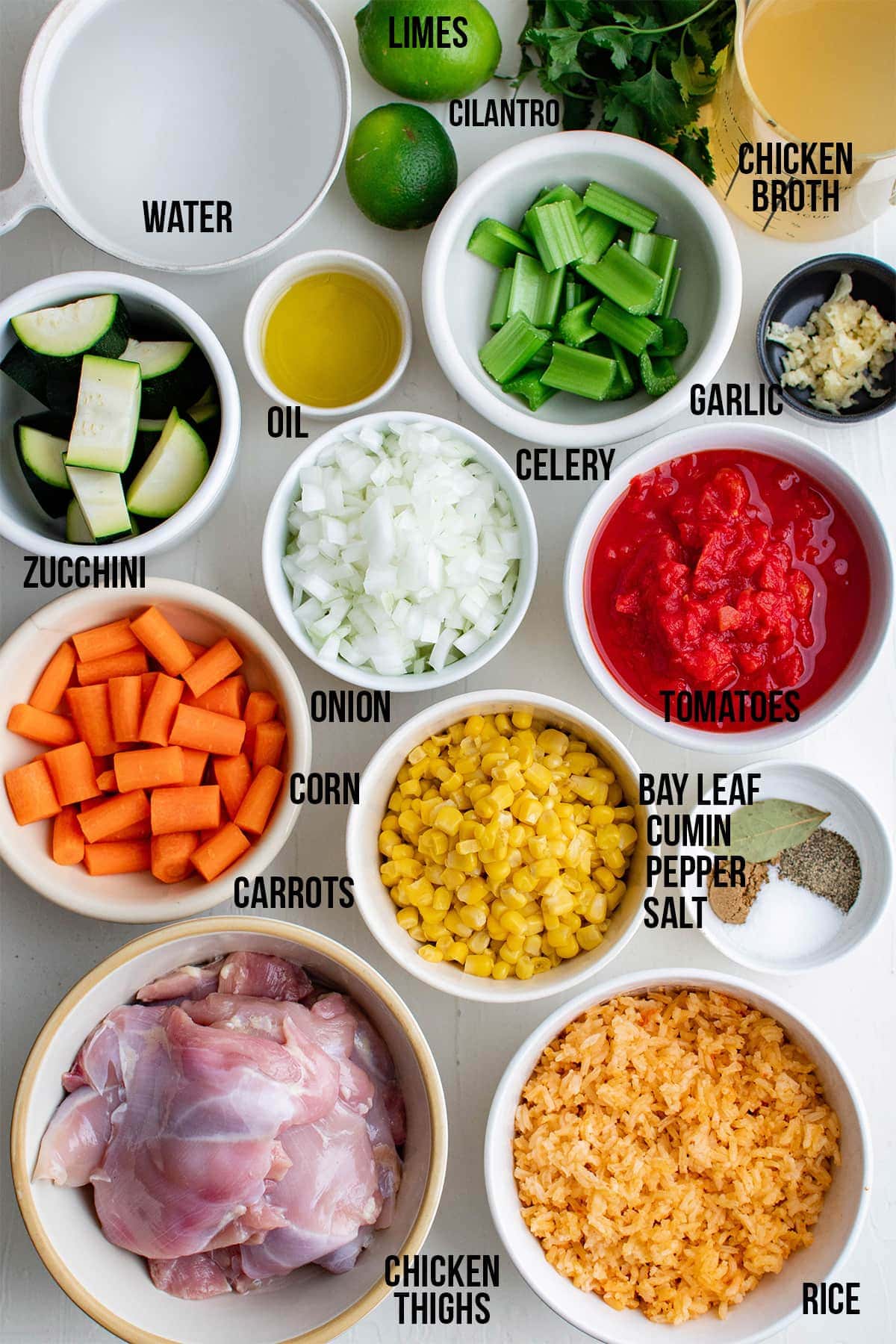 How to Make Caldo de Pollo

Like traditional chicken soup starts with a mirepoix, my Caldo de Pollo starts with sofrito, which is the vegetable and spice base for soups, stews and other hearty dishes. Saute onions, carrots and celery in some canola oil until they start to soften, then add the garlic, then the cumin, bay leaf, black pepper and kosher salt. 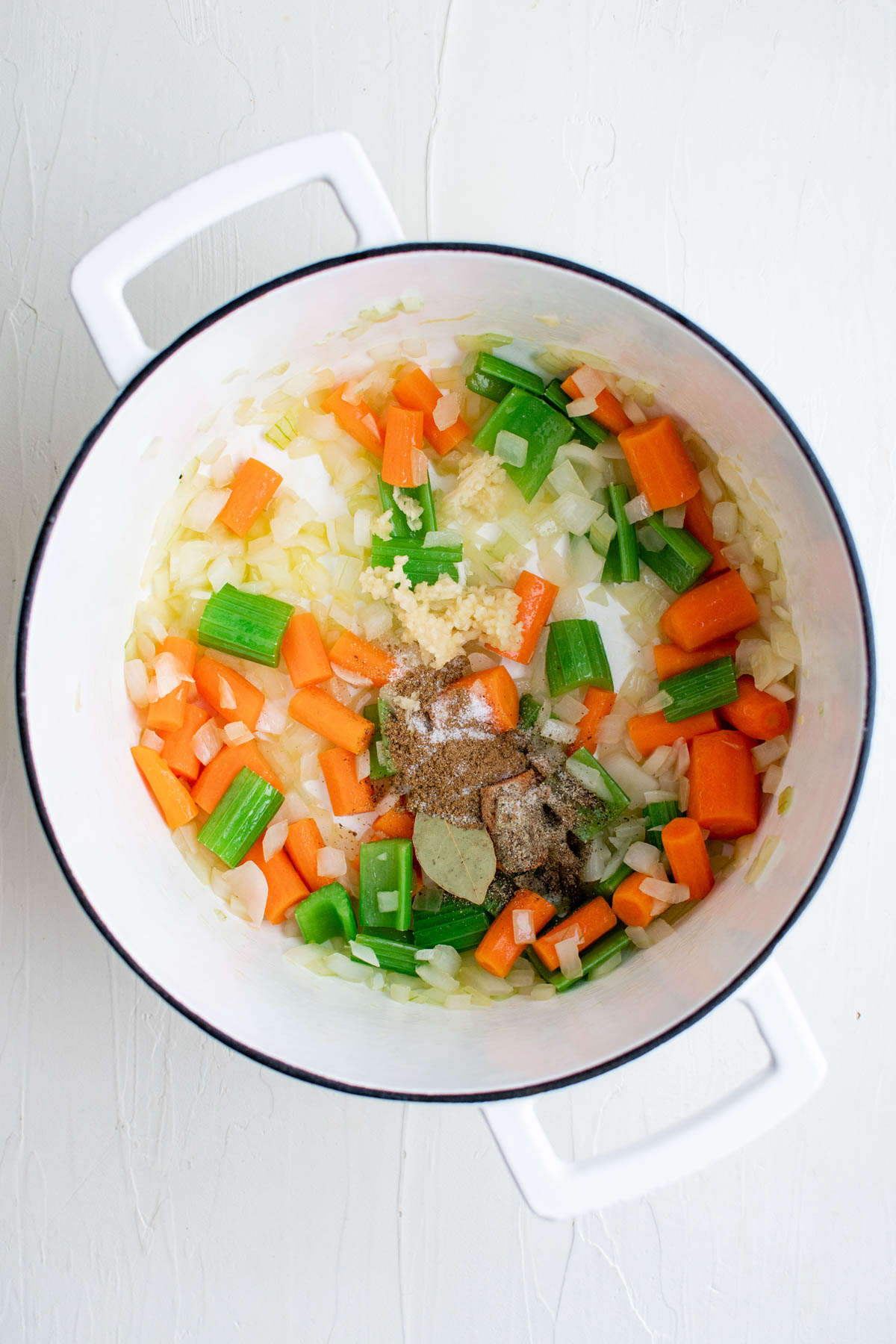 Next add the chicken, undrained diced tomatoes, drained corn, chicken broth and water. You can cut the chicken in smaller pieces but I find it’s easier to remove if they are left whole, plus it won’t really save you time. Bring the soup to a boil, then let it simmer for about 30 minutes. If you need to cut this time down a little bit you can – just make sure that the chicken is thoroughly cooked and the veggies are tender. 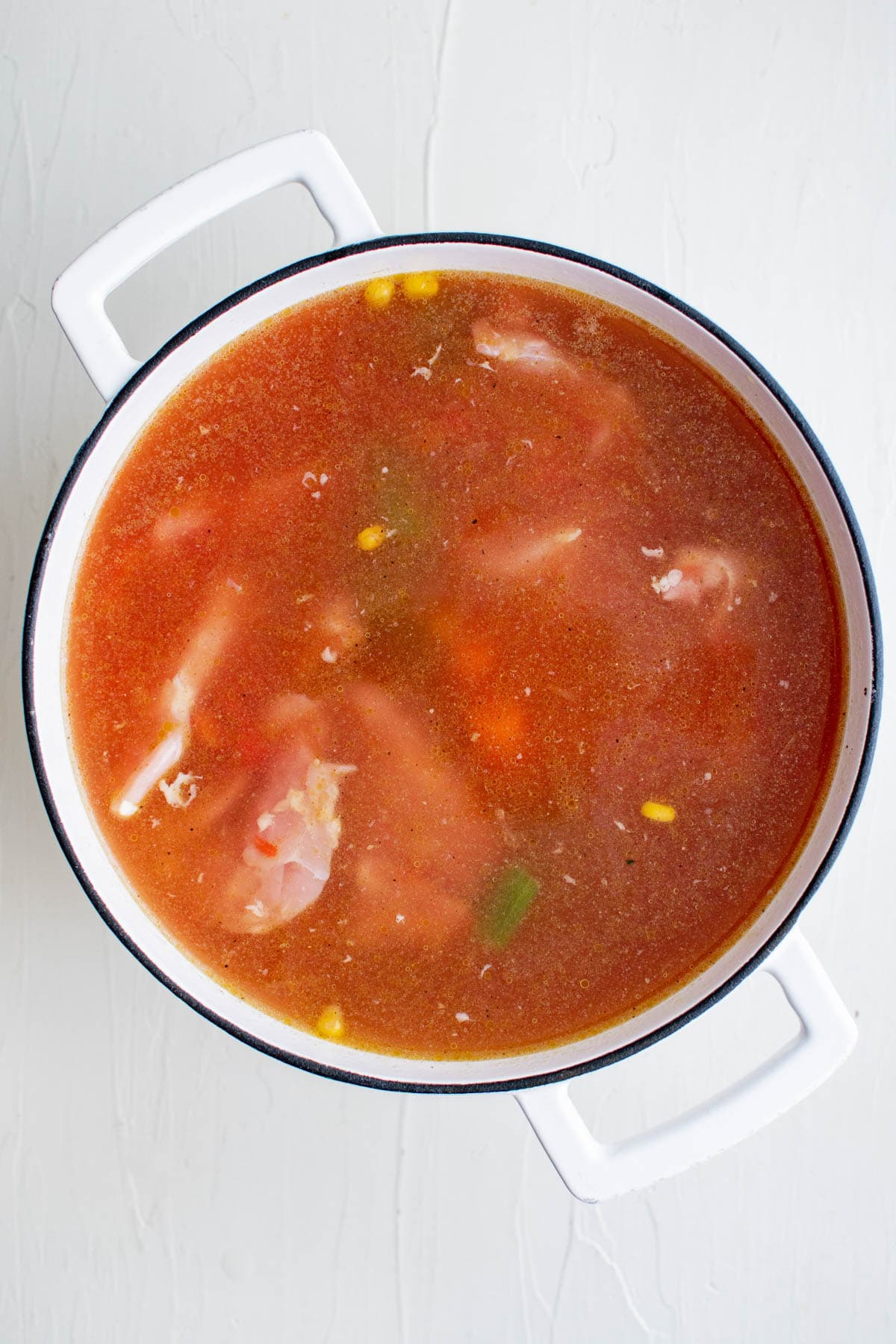 Remove the chicken and place it on a cutting board. Keep the soup simmering and add the chopped zucchini. Again we’re going for large (but still bite sized) chunks. Zucchini cooks pretty quickly, in about 5-10 minutes, so I saved it to add at the end while I’m chopping up the cooked chicken. Roughly chop or shred the chicken and add it back to the pot. The zucchini should be tender, but not at all mushy. 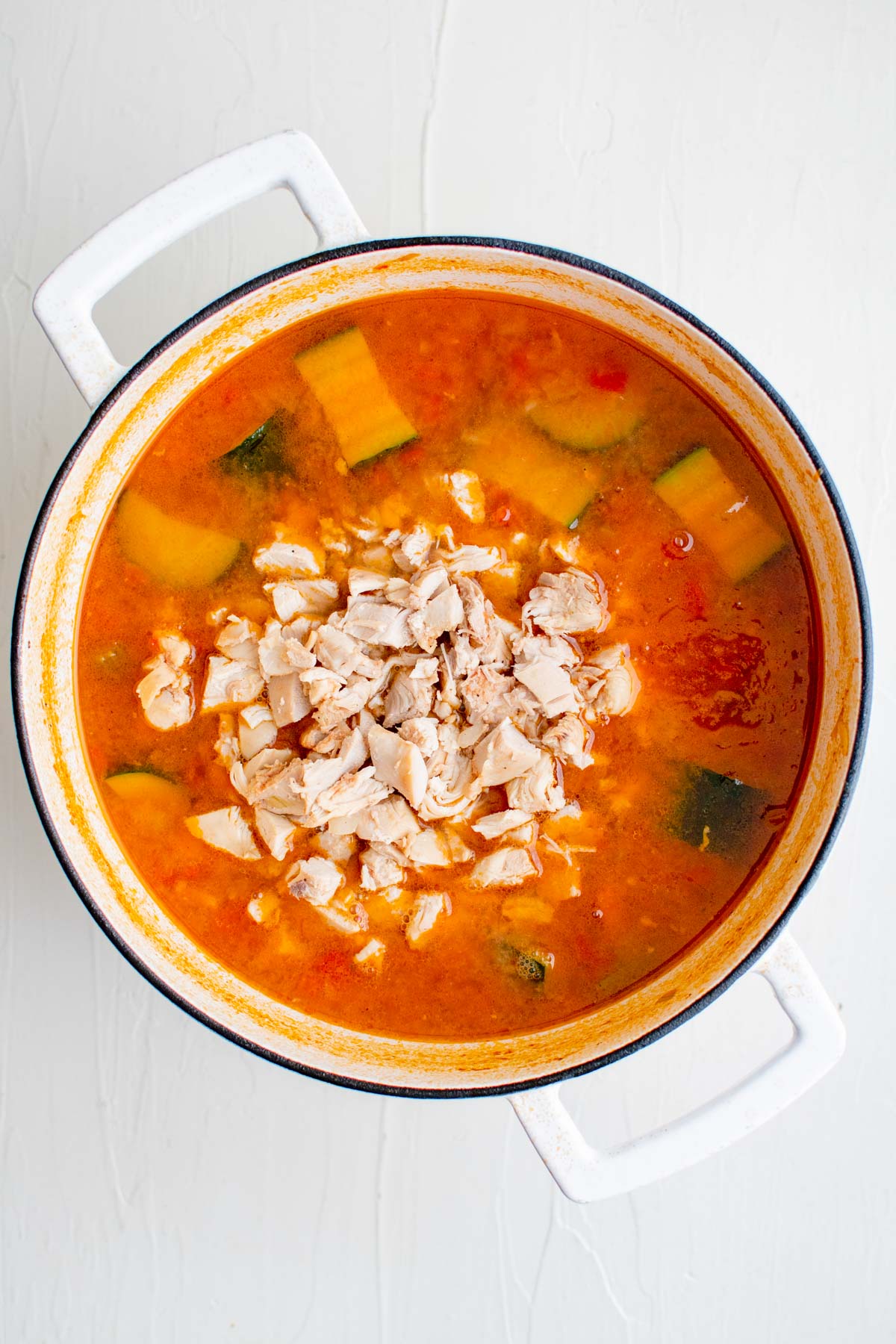 Add some rice into bowls, and serve Caldo de pollo topped with some chopped cilantro and a squeeze of fresh lime. Sometimes I’ll add tortilla strips, crumbled cotija cheese or diced avocado. If you like them, sliced radishes are as delicious in this soup as they are in Pozole and add a nice crunch.

If you want to serve something on the side, flour or Homemade Corn Tortillas are good for dipping, and Elote (Mexican Corn) would be a delicious side dish. 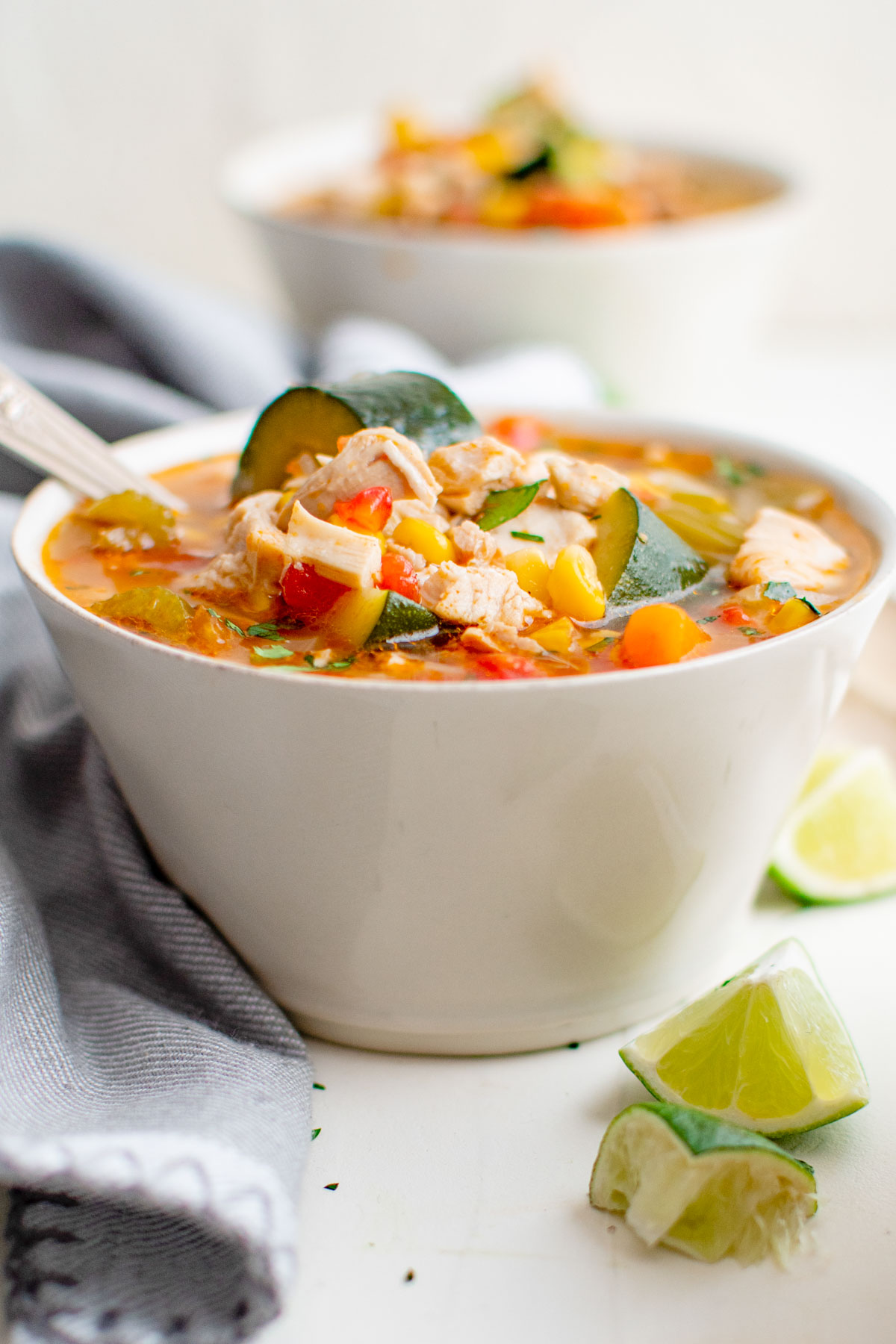 Storage: Caldo de Pollo makes amazing leftovers! Store the rice separately because it will get mushy and thicken the soup if stored together. Keep in an airtight container in the fridge for up to 4-5 days or in the freezer for up to 3-4 months. Note that zucchini does not freeze well, so recommend removing it before freezing. The other veggies should be just fine.

Reheating: If frozen, thaw completely, then reheat in a saucepan on the stove. Microwaving will work, too. We always keep a few servings of cooked rice in the freezer so that would be good to add. 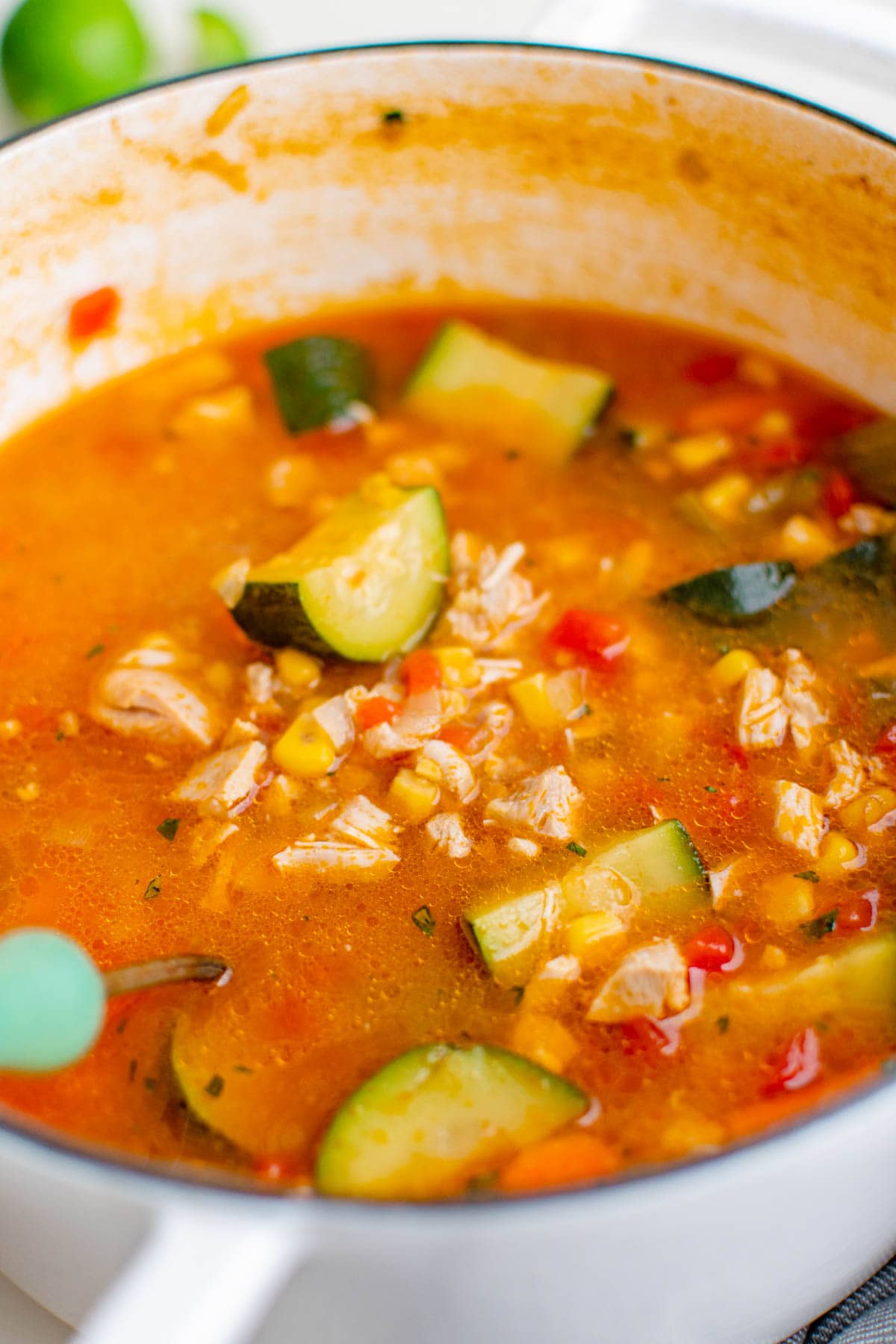 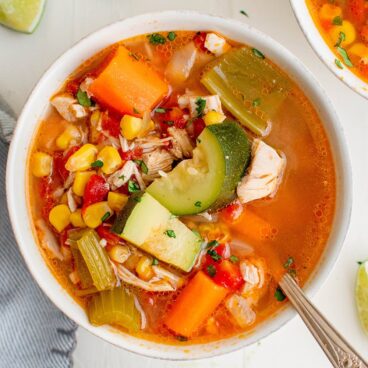 Calories: 369kcalCarbohydrates: 31gProtein: 36gFat: 11gSaturated Fat: 2gTrans Fat: 1gCholesterol: 144mgSodium: 428mgPotassium: 955mgFiber: 2gSugar: 5gVitamin A: 5295IUVitamin C: 17mgCalcium: 75mgIron: 3mg
Have you tried this recipe?
Let us know how it was by leaving a review or sharing on Instagram with the tag #yellowblissroad 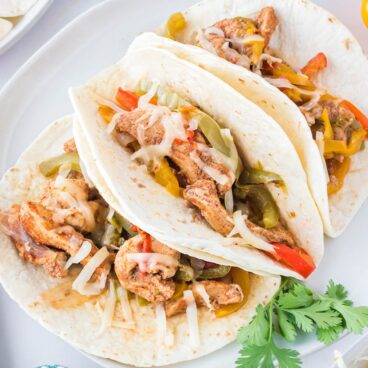 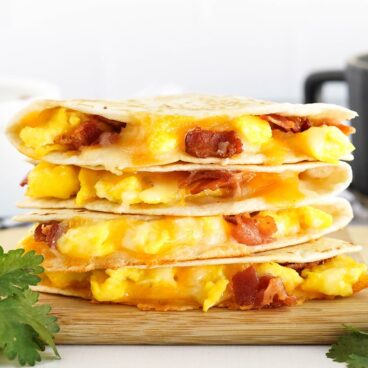 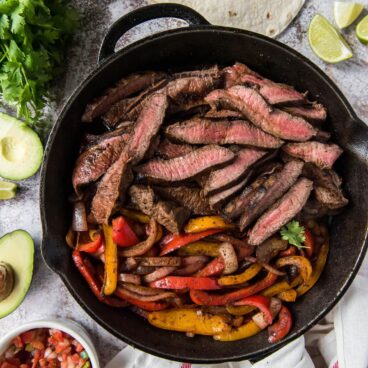 Tender and Juicy Steak Fajitas with Peppers and Onions