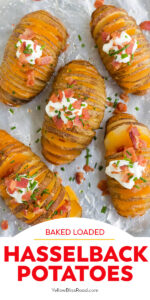 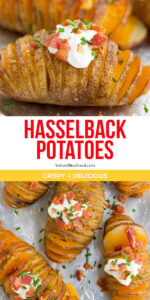 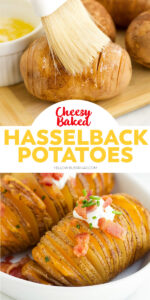 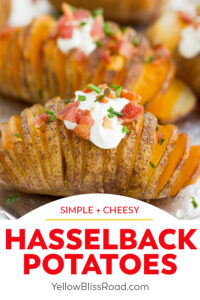 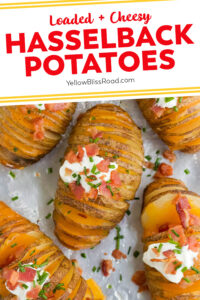 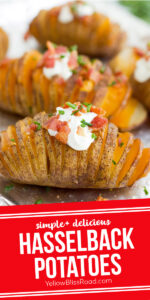 Hasselback Potatoes are the perfect way to break dinnertime boredom. With melted cheddar, crisp bacon, sour cream and fresh chives flavoring each and every slice this easy potato recipe is great for both a side dish and a main course. 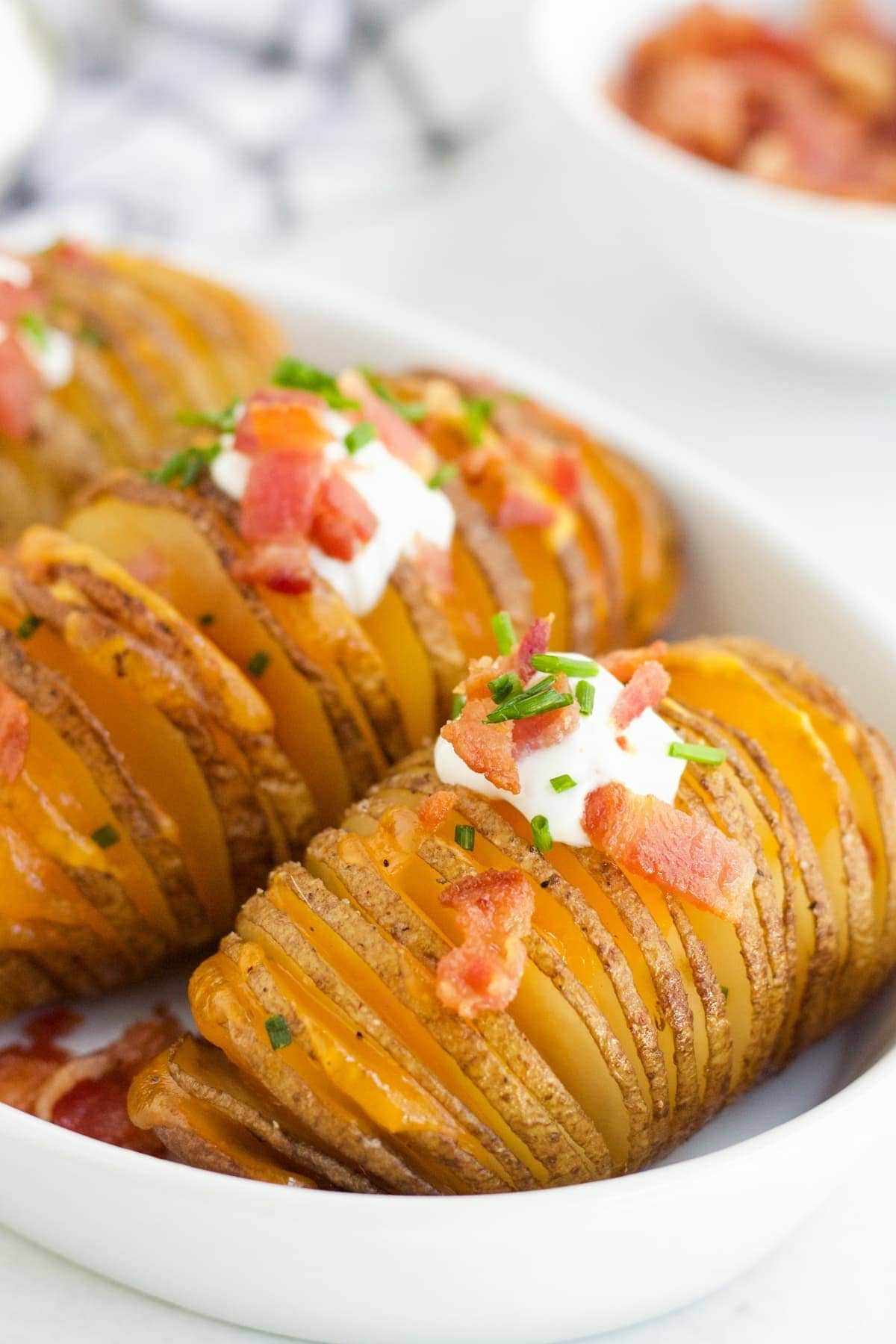 Not only are Hasselback Potatoes eye-catching, they are also super simple to make! With a few pantry staples, you can have them ready for dinner in no time. They are a beautiful side dish to serve with Oven Baked Chicken, Slow Cooker Pork Roast, and Steak.

What is the Hasselback Technique?

Hasselback potatoes got their name from a Swedish restaurant where they originated. The restaurant became known for the technique of cutting their potatoes in thin, even layers.

This technique allowed the toppings to melt in between the layers for optimal flavoring and even cooking. These days, the Hasselback slicing technique is widely used among all kinds of various dishes. It may look fancy, but it’s extremely easy. 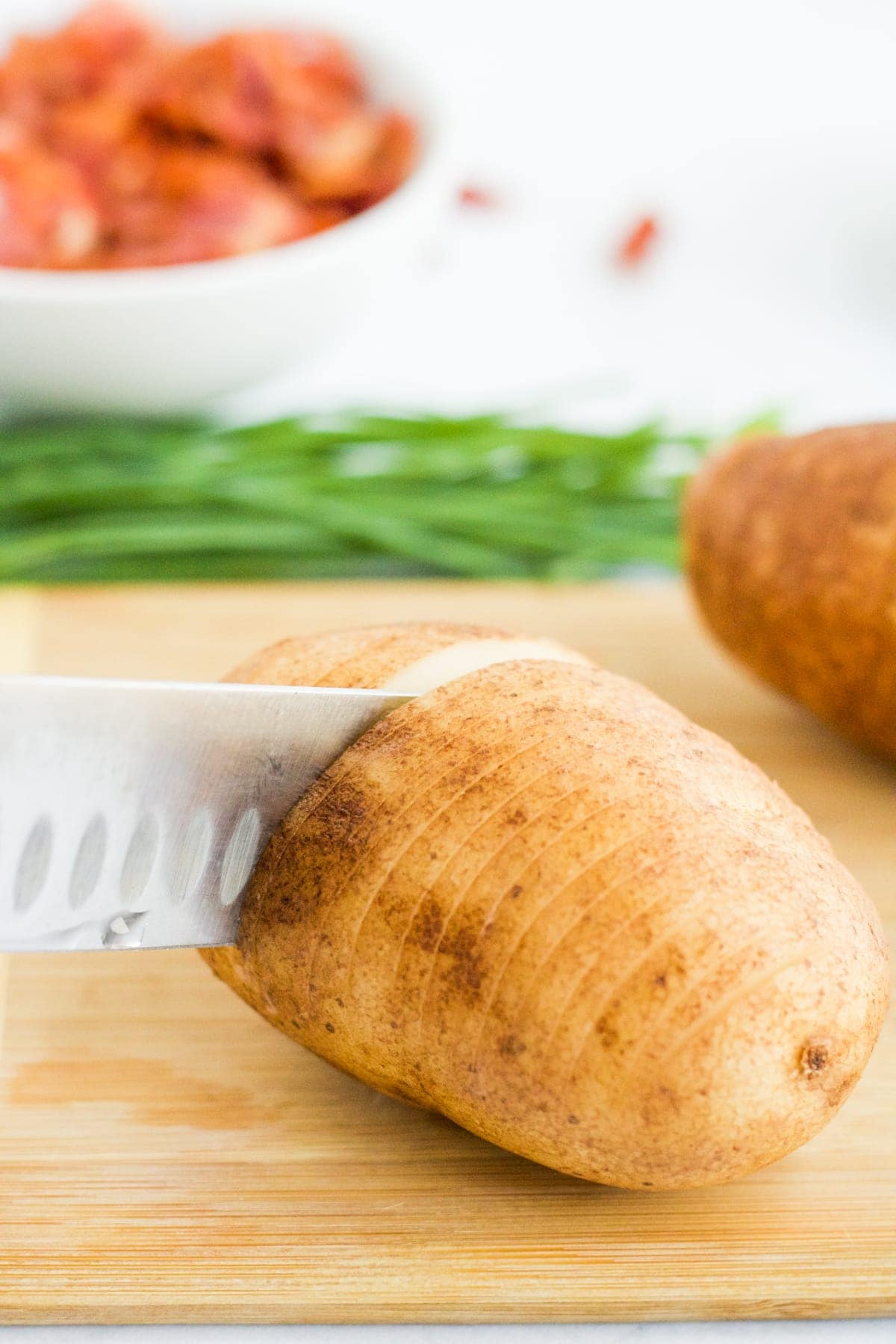 Which Potatoes are the Best for Baking?

I prefer small-medium Russet Potatoes for this recipe, but if you favor another kind of potato you can use this technique and recipe with other varieties too. Yukon Gold and Red Potatoes are an excellent choice for this recipe and a sweet potato would be great as well. 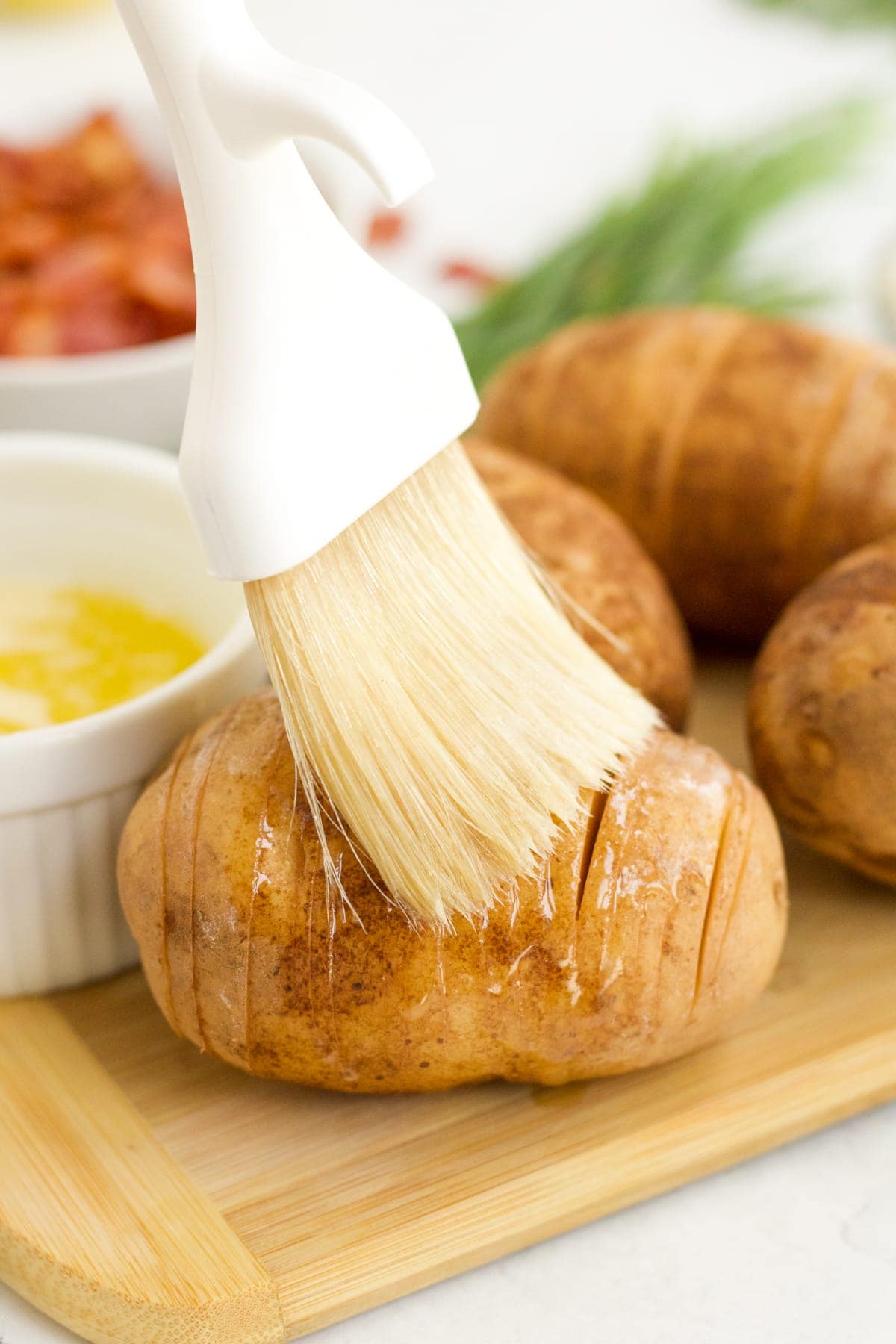 I love loading my potatoes with lots of traditional toppings. The combination of cheese, crisp bacon, sour cream, and chives just can’t be beaten in my opinion. But if you are looking for a change, here are some other toppings you can try. 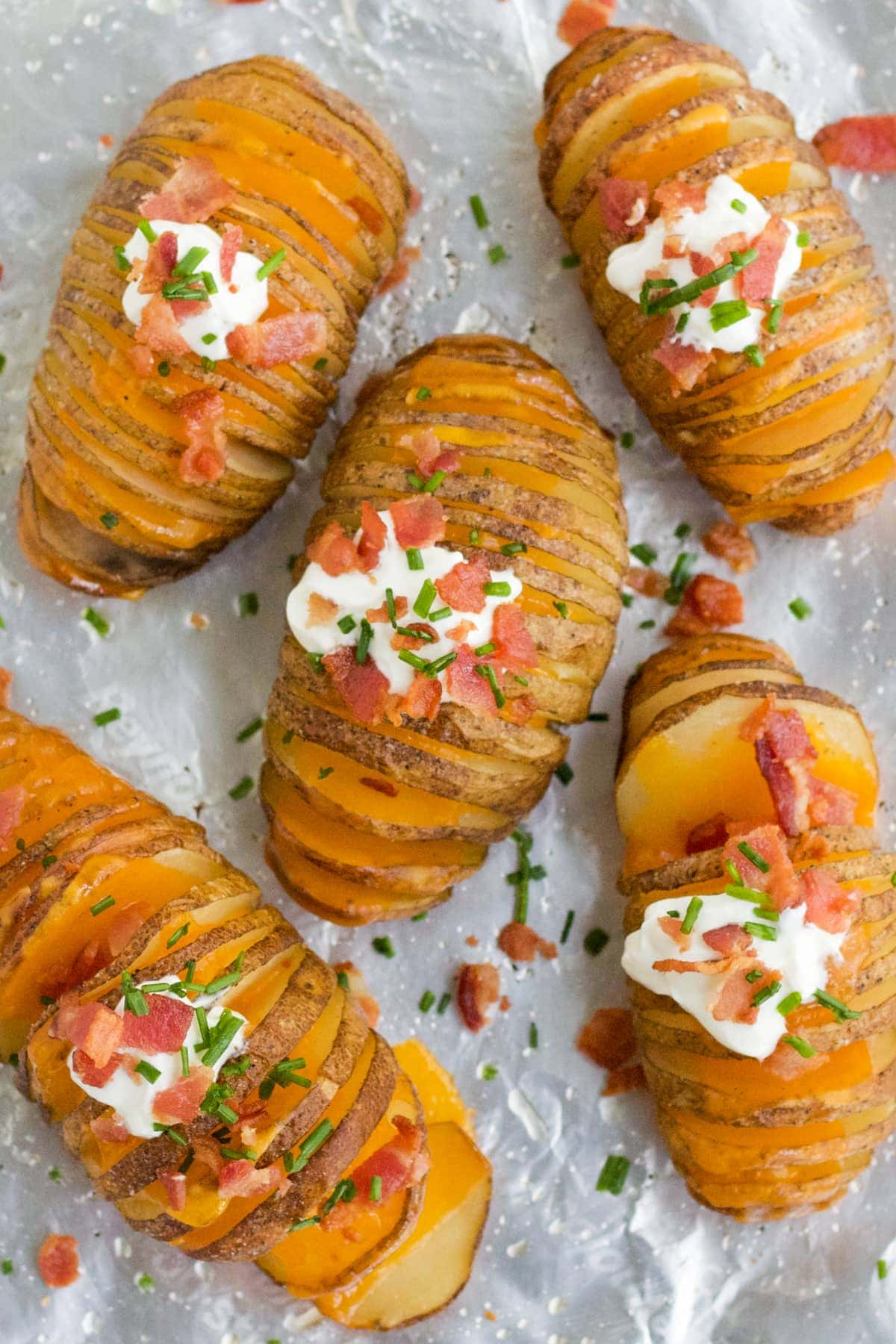 How to Serve Hasselback Potatoes

One of my favorite things about this recipe is that it can be served as a main dish if you use a large potato and is also very versatile as a side item. This recipe would be excellent paired as a side dish for BBQ Ranch Grilled Chicken, Balsamic Chicken, Grilled Marinated Steak or as a main dish with Instant Pot Artichokes, a simple Garden Salad or Instant Pot Asparagus.

This recipe is greatly warmed up! To store, place in an airtight container and keep in the fridge for up to 3 days. To reheat, cook in the microwave until heated through. Be sure to add fresh sour cream and fresh chives! 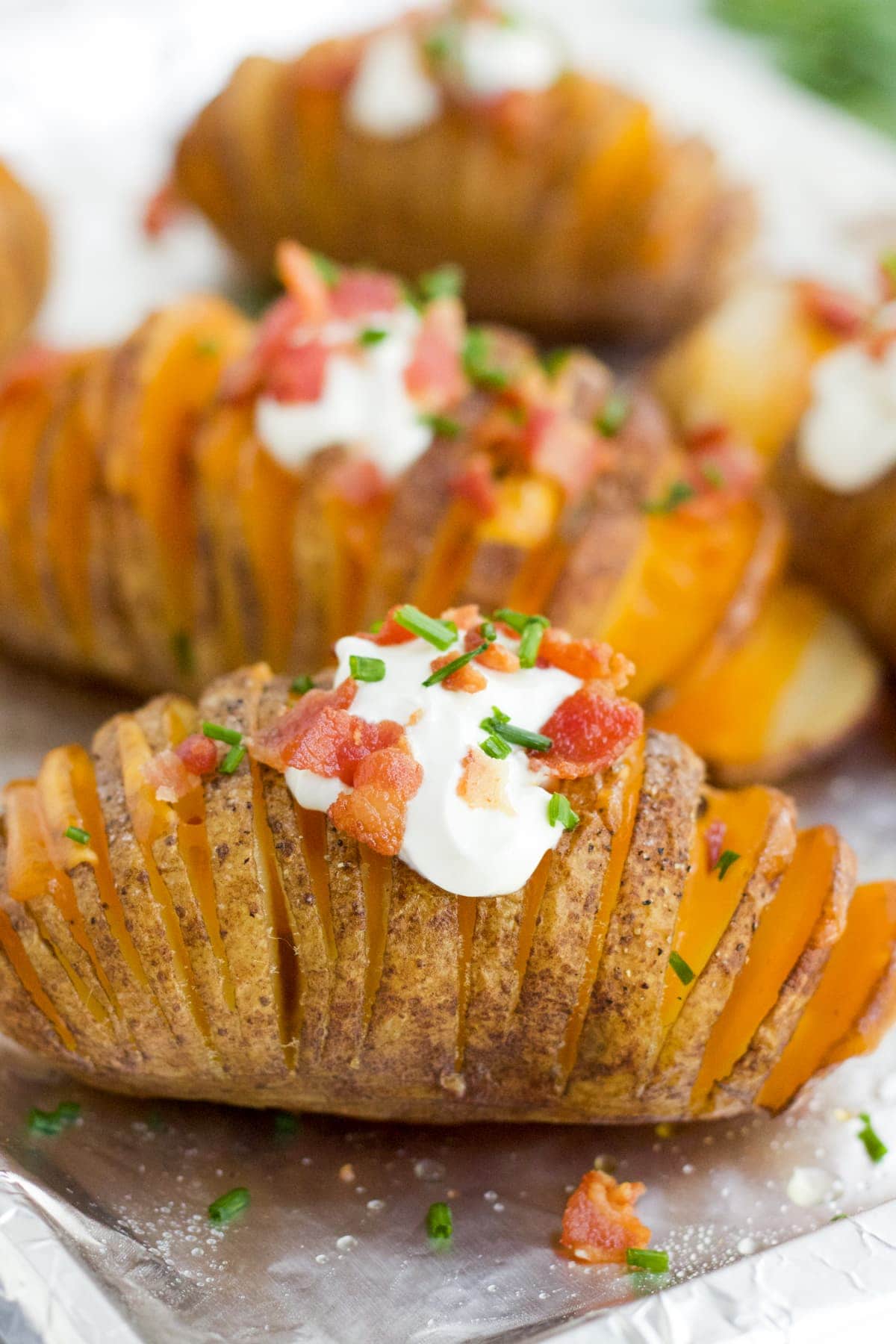 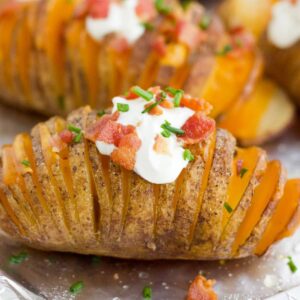 Karen is the creator of Fresh Coast Eats where she shares delicious and easy recipes inspired by the four seasons and the beautiful Great Lakes. Karen is also a certified sommelier and loves to incorporate wine into her recipes as well as suggest perfect pairings.